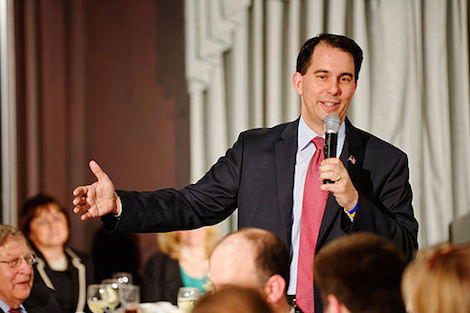 If all it took to win a presidential nomination was big SuperPac money, Scott Walker would still be in the race. As of August 1st (the last reporting period), he was number 3 in the Republican race for SuperPac dollars ($20 million). No matter how much the Koch brothers loved Scott Walker, it couldn’t get him the nomination.

Nicholas Confessore has a pretty good run-down on the limits of SuperPac money.

While a super PAC supporting him, Unintimidated, was relatively flush with cash — on track to raise as much as $40 million through the end of the year, according to people involved with the group — Mr. Walker’s campaign committee was running dry, contemplating layoffs and unable to find enough money to mount a last stand in Iowa, a state that once favored him.

Super PACs, Mr. Walker learned, cannot pay rent, phone bills, salaries, airfares or ballot access fees. They are not entitled to the preferential rates on advertising that federal law grants candidates, forcing them to pay far more money than candidates must for the same television and radio time.

Much to the chagrin of a lot of Republicans I’m sure, we still have a few laws on the books about campaign funding/spending. While SuperPacs are required to operate independently of a campaign and can raise unlimited amounts of money, actual campaigns run by the candidates are limited to $2,700 from an individual. That is the bread and butter candidates rely on for their daily survival. In that arena, Walker was broke.

As Ed Kilgore points out, Walker could have found a way to hang in there without those kinds of funds – much as people like Rick Santorum are doing. But here’s the interesting part: there is enough of a correlation between individual donations to a campaign and actual voter support to make that a losing proposition.

One of the things we should have learned from President Obama’s two campaigns is that small donors ($200 or less) to a candidate not only represent a lot of voters, they are also the foot soldiers who recruit others. So it’s interesting to take a look at who is doing well along those lines among the Republican candidates (BTW, Clinton is blowing the rest of the field out of the water on this one with $47.5 million).

On the opposite end of the spectrum, Cruz also leads the field on the percentage of donations to SuperPacs of $1 million or more (over 95%). As I’ve noted before, the role of SuperPacs has traditionally been to spend money of television ads for a candidate – something that will lose appeal over time as viewers make other entertainment choices. But Confessore notes that Cruz’s SuperPacs are experimenting with something different.

Other super PACs are placing their bets on grass-roots activism, using their cash to build get-out-the-vote operations intended to mimic and complement what the candidates are doing — usually with more money than the candidates can spend. A multimillion-dollar network of super PACs allied with Senator Ted Cruz of Texas, for example, is focused on forming partnerships with anti-abortion groups to help Mr. Cruz with evangelical voters.

That might have something to do with why Cruz is leading Republicans in small donations. I doubt these moves by Cruz are enough to overcome the kind of hostility he has fueled among a lot of establishment Republicans. But it’s probably why he remains in the running while their “favorite son” Walker is now out of it.