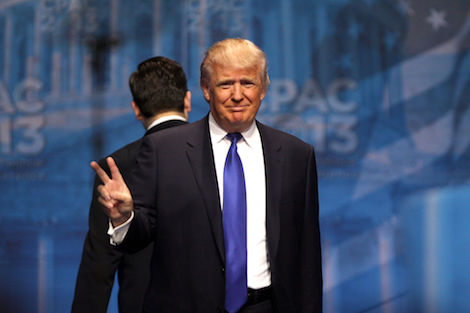 For all I know, the punditocray is right in prophesying that “the summer of Trump” is over. But it remains hilarious how frantic they are to manufacture evidence for this proposition. Today’s chief exhibit is from a Kyle Cheney piece in–you guessed it–Politico.

After faltering in last week’s debate, Donald Trump showed signs that the campaign grind has taken its toll. He’s taking longer to shake off controversial remarks, delivering relatively subdued performances during interviews and campaign appearances, and, most disconcertingly, stalling in polls.

Statistically unchanged…holding pattern…stalled momentum. What this means is that Trump is no longer making measurable progress in the polls, and merely continues to run first at a level no other candidate has achieved at any point in the Invisible Primary, despite an epic pounding from the MSM and various rivals. No, he’s not going to keep increasing his support in an upward arc towards 100%. Does that mean he will be down there in the teens by Halloween or single digits by Caucus Night? Maybe, maybe not; we just don’t know. But as in sports, “momentum” in politics is an incredibly overrated and sometimes imaginary quality. Every time it appears, you should take whatever follows with a shaker of salt.