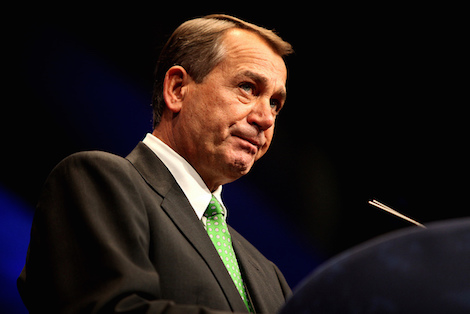 Notwithstanding the vaguely sacrilegious atonement rhetoric surrounding John Boehner’s resignation, the ill winds of division and destruction have not been dispelled from Washington by the Orange Man’s allegedly self-sacrificing decision to get a head start on his lobbying career after a year’s respite of sun and fun at his golf resort condo in Florida. No, the concession made by House conservatives in exchange for Boehner’s scalp is a willingness not to blow up the GOP House conference once the lame duck Speaker avails himself of Democratic voters to pass a short-term continuing appropriations resolution. So once again the can has been kicked down the road, per this report from Politico‘s Seung Min Kim:

[T]he glide path to avoiding a shutdown this week sets up an even bigger clash in December, when lawmakers have to agree on a new funding bill for the new fiscal year. Democrats at both ends of the Capitol, as well as in the White House, will demand raising the current caps for domestic spending. But hawkish Republicans have long insisted on boosting cash for defense programs, while fiscal conservatives will abhor any additional spending overall.

That’s a reminder that while the Planned Parenthood funding brouhaha was (and remains) the efficient cause of a potential government shutdown, there are more fundamental budget issues that are far from being resolved. In addition, the public debt limit will probably be breached about the time the CR runs out, creating another “fiscal cliff.”

Attention will be distracted from this reality momentarily as congressional Republicans make gesture after gesture on Planned Parenthood after relenting on the immediate shutdown threat. The big question now is whether a majority of GOPers will get behind the idea of a budget reconciliation bill that would, unless blocked by the Senate parliamentarian, might get a measure zapping Planned Parenthood funding onto the president’s desk for an emphatic veto that confirms the shocking news that Democrats are pro-choice. But unless something changes, the budget crisis will arise again at the worst possible moment, probably right as the GOP presidential nominating contest gets very real and the views of very wingnutty Iowans suddenly matter more than life itself.