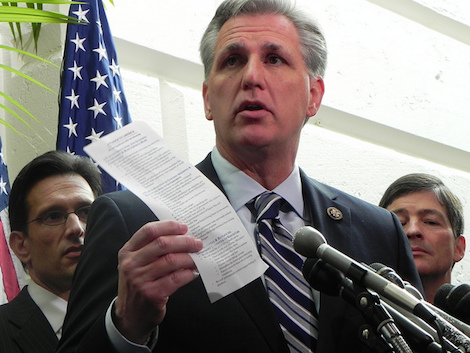 Okay, I probably have a jaundiced view of American politics, but I just don’t understand this sentiment:

My guess is that McCarthy’s epic blunder last night will further strengthen “next gen” dynamic in GOP leadership races.

Now, Simon Rosenberg is referring to the fact that Speaker of the House-in-waiting Kevin McCarthy went on Sean Hannity’s show last night and openly admitted that a primary motivation for creating the congressional Benghazi! committee was to damage Hillary Clinton’s reputation for trustworthiness.

To say that this was the worst-kept secret in Washington DC would be to imply that it was a secret at all. Everyone, and I mean everyone knows that the right’s obsession with Benghazi has been from the very beginning a way they hoped to damage Hillary Clinton. Sure, there was a brief period of time when they thought that the issue might help Mitt Romney win the election, but that basically ended with the “Please proceed, governor” moment in the Candy Crowley debate. And, back then, the issue was mainly about whether the president had been willing to call the attack an act of terrorism or not, and whether the government had actually apologized to the perpetrators.

Once the thing became a conspiracy theory, the idea was that the State Department was at fault.

Now, I know that in certain Beltway circles telling the truth is considered one of the worst possible gaffes, but McCarthy bragged about the effectiveness of this smear campaign precisely because he wanted to remind people that the Republicans deserve credit for finding ways to effectively fight back against the Democrats. In other words, he was reminding the Republican base voter that there actually are examples where the Republican leadership did something extraordinarily partisan and obnoxious and that it worked. The reaction will probably be exactly what he hoped for. He gets a pat on the head and a couple of “Atta Boys.”

The idea that Republican members of Congress will clutch their pearls in horror that McCarthy defended their performance is a big reach, in my opinion.

These folks are so beyond the norms of behavior that you’d expect of your children that it’s absurd to hold them to those kind of standards. When one of them gets caught in a lie, that’s a badge of honor, and it’s not even remotely problematic to get caught telling the truth if the truth is that you’ve been lying.

If you think I am engaging in hyperbole here, just remember back when Mitt Romney set the land-speed record by telling 533 lies in a mere 30 weeks– (and that tally ended in August). Republicans did not blink. They had no problem with Romney’s pathological relationship with the truth. If anything, they wanted him to be a more convincing liar.

Look at Carly Fiorina right now. She’s doing well, recently, and how many of the people running against her have questioned her truthfulness? It’s not an issue for them. It’s not something they can score political points with, because the base does not want their heroes to tell the truth.

I can’t remember the last time a Republican officeholder got in trouble with the base for lying. Sure, the base thinks that promises were made to them that were made in bad faith, but that’s a different kind of lie. Lying for the cause is expected and rewarded.

If McCarthy is auditioning for the role of the most powerful Republican in Washington DC, he’s off to a good start. Why should Republicans support him? Because he won’t let the truth get in the way of brawling.

That’s all the base really wants.