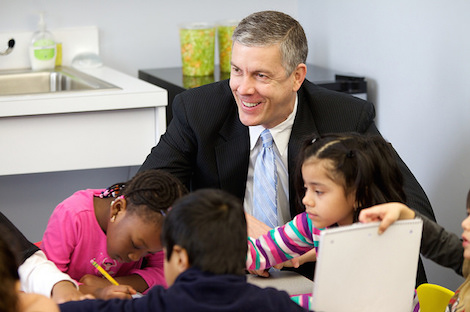 Arne Duncan will go down as the most influential secretary in U.S. history.

He maximized federal powers to push states to serve all students when those states clearly were not. But pushing from the top isn’t sustainable.

And after Duncan’s seven hard-fought years, we may have realized the zenith of federal authority because of Duncan’s tenure.

Related: What Arne Duncan did to American education and whether it will last

Although Congress is negotiating authorization of the Elementary and Secondary Education Act – the legislation that outlines the federal role – improvements will have to come from the bottom up for the foreseeable future.

A bottom up approach may be for the better; black and brown families certainly can’t trust states to create equitable educational systems. Students of color are less likely to have experienced and effective classroom teachers.

States impose racially biased out-of-school suspension and expulsion policies that hurt black and brown communities. Merit-based student financial aid programs favor middle- to upper-income families instead of first-generation collegians. And the stubborn outcomes for black, brown and low-income families say more about a system of inequality than anything about student potential.

Black, brown and low-income folks need higher academic standards. The rigor behind Common Core had even middle class whites crying to opt out. Families and policymakers also need data that can tell us how well students are learning.

Duncan’s insistence for common metrics addressed this need. Families also need states to intervene when it’s clear that little is being done to turnaround failing schools. Duncan doubled down on Bush’s No Child Left Behind accountability system. The only relief states could receive from NCLB’s hard penalties was to accept a reform package from Duncan.

Families need new curricula, teaching methods and schools. From aggressively promoting charter schools to teacher evaluations to supporting Common Core, Duncan pushed how far the federal government can assert itself in K-12 education without running it from the White House. Duncan’s record on addressing all of the aforementioned issues is unassailable.

But Duncan’s tenure hasn’t made it clearer as to how the feds can force/compel/incentivize states to protect disenfranchised people. Future secretaries should ask underserved folks for that advice.

Duncan’s replacement John King will have to help Democrats get elected into office in the 2016 elections. This won’t be an easy task because Democrats can’t always leverage reforms to garner votes.

Duncan’s strategy often enriched and empowered the same state departments of education who facilitated past inequality. Elected officials and superintendents come and go. Staffers linger. Incentivizing the same staffers that created inequalities is like paying ransom. In addition, there are too many people who call themselves reformers who undermine gains Duncan’s policies could make with contradictory housing, policing or health policy.

When staunch Republican Gov. Bobby Jindal can claim the initiatives that Duncan praises, you know you have more than a branding problem. At his presidential announcement, Jindal said, “We reformed education with nearly 100 percent charter schools in New Orleans and now we have statewide school choice because every child deserves an equal opportunity for a great education.”

Too many non-progressives find cover under the reform tent. These phony-progressives may be data driven, but they’re not people or community driven – people not data should always be the driver. Moreover, the feds have not found effective means to ensure that the specific communities and districts that needed change are the actual implementers of the reforms. For instance, people who should be considered most eligible for a charter school should be the proven school leaders and personnel from the geographic and/or racial communities where change is needed.

Reform should be done with communities, not to them.

Even from a Democrat, top-down approaches don’t engender trust. Top-down approaches may seem faster and efficient, but nothing is sustainable without support from the constituents you actually need – teachers, parents and members of congress.

Because nurturing local, diverse talent wasn’t an explicit goal of reform, we moved too quickly from developing local talent and investing in innovations to scaling up outsiders and unproven schemes. As an example, the promises that charter schools would presumably bring were neither properly vetted nor sufficiently time tested. As a consequence, charter schools in the main look no different than traditional public schools. In some cases they just look whiter. Scaling up without diversity also meant that we were ramping up the white privilege.

School leaders under pressure to meet benchmarks simply leaned on what’s predictable and comfortable – quality traditional schools – rather than introduce new curricula and teaching methods that reflect changing times and demographics. Notwithstanding waivers, Duncan turned a blind eye to accountability hawks who were more like accountants than entrepreneurs.

Those same hawks too often wanted to break apart systems rather than improve or develop them. These kinds of actions spoiled the well for Duncan politically and made future party-blind movement untenable.

So after seven years, politically speaking, black and brown communities are in the same position. Public school advocates will have to work from the bottom up to sustain the reforms we need. Students, teachers and parents may be part of the problem, but they have to be the lion’s share of the solution.

Arne Duncan served nobly. And we are the wiser for it.