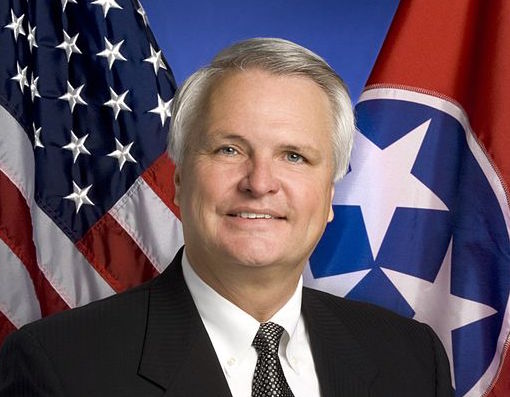 This seems to be the thinking, so to speak, behind Tennessee Lt. Gov. Ron Ramsey’s call for Christians to start packing heat. He even made it a sort of test of religious fidelity, according to a report from WaPo’s Elahe Izadi:

Like many Americans, Tennessee Lt. Gov. Ron Ramsey (R) took to social media to post his reaction to the mass shooting last week at Oregon’s Umpqua Community College. Ramsey’s Facebook post Friday focused on one aspect of the tragedy: that the gunman reportedly asked his victims whether they were Christian and then shot them if they answered yes.

Ramsey’s solution? “Fellow Christians who are serious about their faith” should “think about getting a handgun permit.” He included a link to a state government Web site instructing residents on how they can acquire such a permit.

“The recent spike in mass shootings across the nation is truly troubling,” wrote Ramsey, the speaker of the Tennessee Senate. “Whether the perpetrators are motivated by aggressive secularism, jihadist extremism or racial supremacy, their targets remain the same: Christians and defenders of the West.”

He continued: “While this is not the time for widespread panic, it is a time to prepare.” Then, he added: “Our enemies are armed. We must do likewise.”

I don’t know what is more disturbing: that Ramsey thinks a mentally ill right-wing gun nut is part of a global conspiracy against “Christians” and “defenders of the West,” or that he thinks it appropropriate to urge Christians as Christians to resort to lethal weaponry. I mean, I’m guessing he’s heard the “turn the other cheek” and “love your enemies” portions of the Gospels at some point or another. So it’s unclear why being “serious about their faith” would lead someone to plan to shoot people dead.

Ramsey, of course, is prone to religious confusion; he’s one of the strangely numerous Tennessee Republicans who think their state is on the very brink of subjection to Sharia Law. Perhaps he will next instruct Christians on which of their enemies to shoot first.

Oh, and by the way, I disagree with Ramsey on one more thing: it actually is the time for Widespread Panic. Here’s the Athens-based band covering a John Lennon song Ramsey might want to take to heart: “Crippled Inside.”