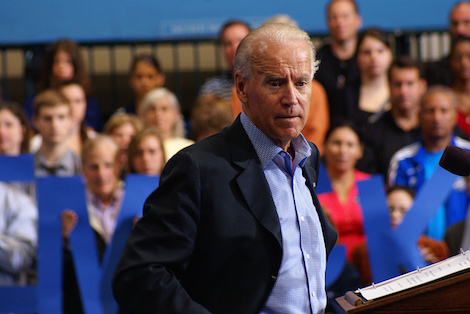 So yesterday there was a big, big kerfuffle in chattering classes everywhere over Edward-Isaac Dovere’s claim at Politico that it was Joe Biden himself who told Maureen Dowd of the New York Times about his late son’s dying wish that he run for president–which when reported by Dowd in an August 1 column touched off the whole media feeding frenzy about a Biden candidacy.

I didn’t write about the column yesterday, figuring I’d give it a day; I don’t particularly trust Devore as a reporter, and the whole story-line seemed too “Democrats in Disarray-ish” for my taste, making Biden seem manipulative and Hillary Clinton look like a sitting duck.

Today we have some pretty massive pushback from Biden-land, per Stephen Collinson of CNN:

Biden’s office issued a vehement dismissal of the story.

“The bottom line on the Politico story is that it is categorically false and the characterization is offensive,” said a Biden official on condition of anonymity.

I tell you how I’m feeling: it’s time for the vice president to publicly say “Yes,” “No” or “Maybe” to a presidential run instead of letting this bizarre speculation continue perpetually. “Maybe’s” fine with me; I’d personally be fine with him admitting he’s offering himself as a fallback option if something terrible happens to the field. But sorta kinda running for president via media hints that are turned into attacks on Hillary Clinton, Bernie Sanders, and the Democratic Party itself should no longer be an option. I have no direct evidence on the question of whether or not Biden is personally fanning the speculation, but have no doubt he’s the one person who can resolve it.