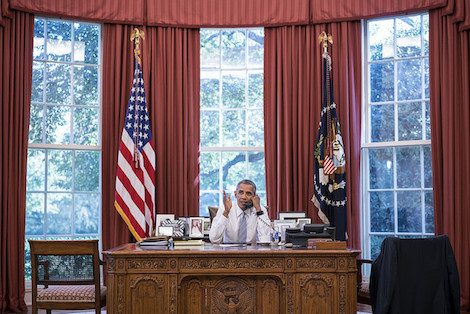 The contentious part of Steve Kroft’s 60 Minutes interview with President Obama demonstrated something I’ve been talking about for years now – this President rejects the idea that dominance via military intervention is the only kind of strength. Instead, he sees the power of partnership as the basis for a 21st Century foreign policy. So often when I write about this, I go back to what he said in Cairo in 2009.

For human history has often been a record of nations and tribes — and, yes, religions — subjugating one another in pursuit of their own interests. Yet in this new age, such attitudes are self-defeating. Given our interdependence, any world order that elevates one nation or group of people over another will inevitably fail. So whatever we think of the past, we must not be prisoners to it. Our problems must be dealt with through partnership; our progress must be shared.

Kroft’s questions were all based on the human history Obama describes as nations “subjugating one another in pursuit of their own interests.” That is exactly what Putin is attempting to do in both Ukraine and Syria. Given that as a frame, Kroft assumes that Putin is challenging Obama’s leadership. All of that makes sense if your way of understanding the world is to assume that dominance via military intervention is the only form of power.

But Obama reframes Putin’s actions as a sign of weakness.

When I came into office, Ukraine was governed by a corrupt ruler who was a stooge of Mr. Putin. Syria was Russia’s only ally in the region. And today, rather than being able to count on their support and maintain the base they had in Syria, which they’ve had for a long time, Mr. Putin now is devoting his own troops, his own military, just to barely hold together by a thread his sole ally…

Well Steve, I got to tell you, if you think that running your economy into the ground and having to send troops in in order to prop up your only ally is leadership, then we’ve got a different definition of leadership.

Keeping the idea of partnership as a basis of power in mind, it is interesting to note how many times throughout this discussion Obama made the point that Syria is Putin’s only ally in the Middle East.

Now, take a look at how Obama defines leadership.

My definition of leadership would be leading on climate change, an international accord that potentially we’ll get in Paris. My definition of leadership is mobilizing the entire world community to make sure that Iran doesn’t get a nuclear weapon. And with respect to the Middle East, we’ve got a 60-country coalition that isn’t suddenly lining up around Russia’s strategy. To the contrary, they are arguing that, in fact, that strategy will not work.

In other words, demonstrating leadership means wielding power through the development of partnerships to achieve shared progress.

What I found most interesting about this interview was the clash of these two world views. Getting people to open their eyes to the fact that dominance via military intervention is ultimately self-defeating and destined to fail is a cultural evolution that remains an uphill battle in this country, partly because it is still so embedded in our social structures and – to a large extent – our personal relationships. As Riane Eisler says:

It’s not coincidental that throughout history the most violently despotic and warlike societies have been those in which violence, or the threat of violence, is used to maintain domination of parent over child and man over woman.

On the other hand, helping people understand that working in partnership is not “throwing in the towel” (as Kroft put it), but an alternative form of wielding power is a difficult task because anything short of dominating is seen as weak (i.e., feminine or unmanly). What President Obama is doing via successes with things like the Iranian nuclear deal and hopefully a global climate accord in Paris is to demonstrate that there is power in partnership.