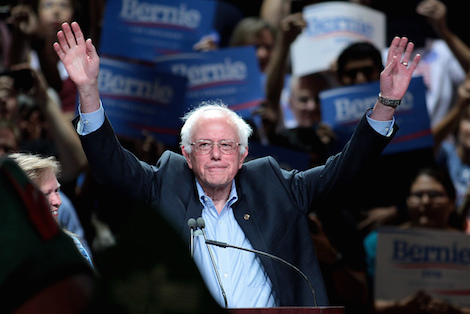 Anyone who has been able to sit through both the Republican and Democratic presidential debates is very well-versed in the chasm that currently exists between the two parties. When all is said and done, the public is going to have a very clear choice between two starkly different directions for our country to embrace in November 2016. That is a good thing – especially for Democrats who seemed intent on watering down the differences in the 2014 midterms.

But Tuesday’s debate also clarified the differences between Clinton and Sanders. Matt Yglesias does a good job of teeing that up.

As we know from both the debate and their position statements, Clinton wants to regulate the big financial institutions and Sanders wants to break them up. The argument from the Sanders wing is that we can’t trust the government to be the regulator.

I remember that same argument coming up between liberals during the health care debate. Those who dismissed the ACA in favor of single payer often said that any attempt to regulate health insurance companies was a waste of time. I always found that odd based on the Democratic tradition of embracing government regulation as the means to correct the excesses of capitalism.

This basically comes down to whether you agree with Sanders when he says that we need a “political revolution that upends the balance of power” or do you agree with Clinton when she said, “it’s our job to rein in the excesses of capitalism so that it doesn’t run amok.” Peter Beinart calls it the difference between an insurrectionist and an institutionalist.

Depending on where you stand on that question, your solutions will look very different. That helps me understand why I never thought Sanders’ policy proposals were serious. Someone who assumes that the entire system is rigged isn’t going to be that interested in “nuanced and narrowly tailored policies” to fix it.

But in the end, this puts even more of a responsibility on Sanders’ shoulders. If he wants a political revolution to upend a rigged system, he needs to be very precise about what he has in mind as a replacement to that system. Otherwise, he’s simply proposing chaos.