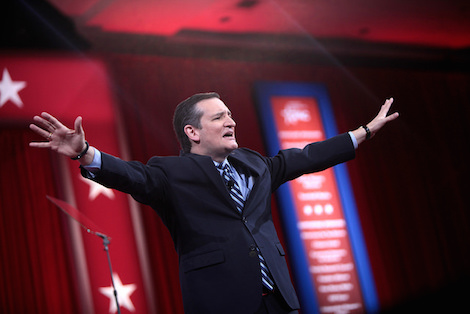 So here was Ted Cruz’ calm and reflective observations about the first Democratic presidential debate, as conveyed to an Iowa audience (per the Dallas Morning News‘ Todd Gillman):

“It was more socialism, more pacifism, more weakness & less Constitution,” he told about 100 people crammed into a motel lobby in Kalona, a small town in southeastern Iowa. “It was a recipe to destroy a country.”

Speaking after the campaign event with reporters outside the Dutch Country Inn, Cruz acknowledged that he hadn’t actually watched the debate. During much of it, he was stumping at a Pizza Hut a half-hour away.

But he had firm views on what viewers saw.

I’m guessing a lot of observers hear this sort of thing and just shrug, since “fiery rhetoric” is central to Cruz’ whole act. My friend Greg Sargent scoffed at it as another indication Cruz is a fraud who is fooling the folks into thinking he’s willing and able to bend Congress to his and their will.

But I’m sorry, I think this sort of rhetoric is a serious matter. Why? Because Cruz is one of those presidential candidates (along with Ben Carson and Mike Huckabee for sure; the exact position of several others is unclear) who claim the Second Amendment gives Americans the right to revolutionary violence against their own government if it engages in “tyranny” or doesn’t respect our rights. Here’s what Cruz said earlier this year in a fundraising letter:

“The 2nd Amendment to the Constitution isn’t for just protecting hunting rights, and it’s not only to safeguard your right to target practice. It is a Constitutional right to protect your children, your family, your home, our lives, and to serve as the ultimate check against governmental tyranny — for the protection of liberty,” Cruz wrote to supporters in a fundraising email on Thursday, under the subject line “2nd Amendment against tyranny.”

So when a guy like Cruz starts tossing around words like “tyrant” and “jackboot” and “destroy the country” and “strip your and my individual liberties,” isn’t it possible, perhaps even likely, that at least a few of his supporters might think he’s signaling that the time is near to get out the shooting irons and start executing the Tyrant’s agents? I really think Cruz, Carson and Huckabee need to be asked very specifically on the campaign trail and in debates exactly which circumstances would justify the armed insurrection they defend, and make it clear that Obamacare or a potential repeal of the gunshow loophole or an executive action on immigration don’t qualify.

This isn’t, by the way, just about incitement to violence. All this talk about liberal “tyranny” also illustrates the fundamentally anti-democratic nature of “constitutional conservatism.” Most liberals, even if they really, really hate conservatives, would concede that everybody has the right to contend for their point of view in the arena of elective politics. The central conceit of constitutional conservatism is to deny the equivalence of policy preferences, and to assert that favored conservative policies are permanently enshrined by the Founders–who in turn were inspired by divine and natural law–immune from popular majorities, no matter how large. It helps to understand that when someone like Ted Cruz talks about “liberties,” he’s not just talking about freedom of expression or even of religion, but the right to use your private property however you damn well please free from taxation or regulation or unions.

If you feel your own POV is the only legitimate set of ideas consistent with the Constitution or even the structure of the universe and the Will of God, then you are not going to be interested in compromise or limits on your exercise of power or civility towards the opposition, are you? I’m afraid that is more responsible for what Tom Mann calls “our current distemper” than is usually recognized.

In any event, in the short term progressives, responsible conservatives, and most of all the MSM need to challenge Second Amendment ultras either to repudiate the right to armed insurrection or stop using rhetoric that suggests one of our two major parties is promoting “tyranny” or trying to “destroy the country.”