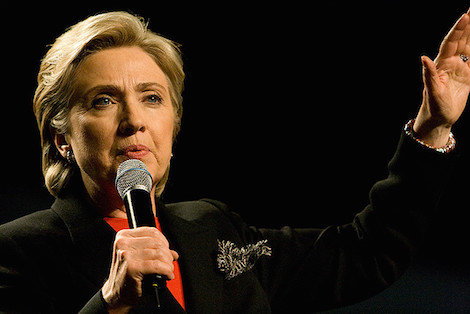 Trey Gowdy opened the hearing of his Benghazi show trial by listing a couple dozen questions that he wants answers to, some of which were so broad as to be completely beyond any reasonable scope of his investigation. For example, why were we in Libya?

I hope they figure that out.

Gowdy then went on to justify the existence of his committee by pointing out that it discovered Clinton’s use of a private email for some official business. If the previous investigations of Benghazi were “serious and thorough,” they would have discovered Clinton’s emails. He also claimed that previous investigators failed to interview relevant witnesses in Libya and in the State Department.

After these justifications, he launched a defense against the accusation that his committee is designed to lower Hillary Clinton’s poll numbers.

Immediately after this, however, he blamed Clinton’s emails for delaying her appearance.

Having tried and failed to persuade people that this hearing isn’t intended more to damage Clinton than to get to the truth about what happened in Benghazi, he then killed any sense that the hearing has bipartisan support. He launched into an attack on the Democrats on the committee, predicting that none of them will ask for documents or witnesses during today’s proceedings.

With that, it was the committee’s ranking member Elijah Cummings turn to make an opening statement. Cummings delivered a scalding attack on the committee and its chairman, accusing them of using an “unlimited budget” to “squander” millions of people’s tax dollars on a partisan witch hunt.

Cummings went into considerable detail to explain how the investigation had “abandoned” plans to interview the former director of the CIA and key people in the Pentagon in order to focus nearly exclusively on people like Clinton’s speechwriters, IT folks, and campaign staff.

Cummings then went through an effort to debunk some of the more notorious conspiracy theories and pointed out that these things had been debunked thoroughly in eight previous investigations.

As he wrapped up, Cummings mocked the accusation that Sidney Blumenthal was Clinton’s “primary foreign policy advisor on Libya” and noted that it been awarded four Pinocchios by the Washington Post.