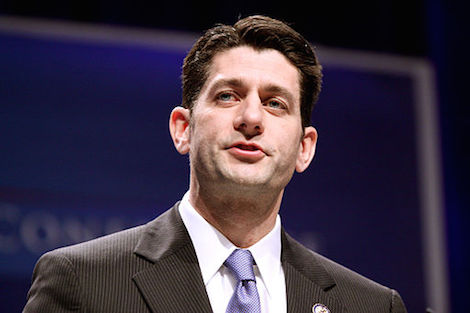 While getting ready to tape this week’s edition of Washington Monthly’s show on Bloggingheads TV, I read a Friday column at the Plum Line from Paul Waldman, who will be our guest this week, about the dynamics of the current debt limit crisis. He convinced me we’re in a bigger crisis than ever this time:

In all of the government shutdown/debt ceiling crises of the last five years, we knew how they would end: eventually, after putting up a show of fighting against that dastardly Obama administration, John Boehner would allow a vote on a bill to either fund the government or raise the debt ceiling, knowing that it would pass only with the votes of Democrats plus a few dozen Republicans sane enough to want to avoid catastrophe. The conservatives would cry “Betrayal!” but the crisis would be over.

Now, Waldman quotes a Politico account as concluding, there are not enough Republican votes in the House favoring a “clean” debt limit bill to combine with Democrats for a majority.

[W]hy are we even more likely now to fail to pass an increase than we were when we had this same crisis in 2011, then again in 2013, then again in 2014? Look at what’s going on in the House. Conservatives there are feeling emboldened because they just got rid of John Boehner, as they had wanted to do for so long. They feel strong and empowered, so naturally they believe that this is a battle they can win, even if they’ve lost before. And they’ve upped their demands.

Now they want not just general budget cuts in exchange for raising the ceiling, but cuts specifically to Medicare, Medicaid, and Social Security. That demand was contained in a document the House Freedom Caucus put out recently, and the conservative Republican Study Committee’s proposal would raise the ceiling in exchange for $3.8 billion in cuts to those programs over the next decade, along with a freeze on all regulations until Barack Obama leaves office. If they think Democrats would ever accept those terms, they’ve lost their minds. But they seem serious.

And moreover, the composition of the House has grown more conservative since earlier debt limit battles.

Waldman points to Paul Ryan’s accession as Speaker as a wild card in these calculations, but suggests there’s exactly zero evidence he secured any concessions on this particular issue from the House Freedom Caucus during their recent discussions. I’d add that Ryan did reiterate his support for re-establishing the Hastert Rule against moving legislation a majority of House Republicans oppose; violating said Rule is precisely how Boehner got the House and the country out of debt limit jams in the past.

So why aren’t the Beltway and Wall Street freaking out over an imminent debt limit crisis? Beats me, unless they’ve all been lulled into an unjustified torpor by the euphoria over Speaker Ryan.