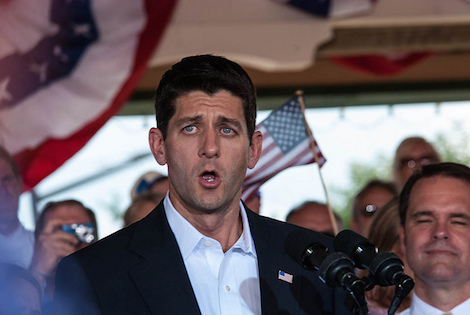 One of the more ridiculous and cynical features of this whole surprise budget deal is Paul Ryan’s expressions of horror and anger. Aside from the fact that the Republican House leadership is not about to blindside their hand-picked Speaker on something this big, there’s the little issue that Ryan’s staff helped draft a big chunk of it. HuffPost’s Arthur Delaney has the story:

Rep. Paul Ryan (R-Wis.) said Tuesday morning that he hadn’t seen the new bipartisan budget deal and that the secretive process used to craft it “stinks,” but there’s stuff in the bill that should smell good and familiar to him.

One of its most important provisions makes changes to the Social Security Disability Insurance program, and some of those changes came from the House Ways and Means Committee, which oversees Social Security and which Ryan chairs.

At 52 pages, the disability insurance provision comprises a significant portion of the 144 page bill. It would prevent a 20 percent benefit cut scheduled to kick in next year for SSDI’s 11 million beneficiaries by diverting revenue from Social Security’s better-known retirement insurance program — a strategy some Republicans previously said amounted to “raiding” that program’s coffers.

The bill is also supposed to save $4 or $5 billion by tightening eligibility requirements for disability benefits, partly by requiring the Social Security Administration to make sure all initial applications include a medical screening.

But we’re supposed to believe super-wonk, budget wizard and Speaker-designate Ryan didn’t know what his staff was up to or how it related to an overall budget deal. Give me a break.