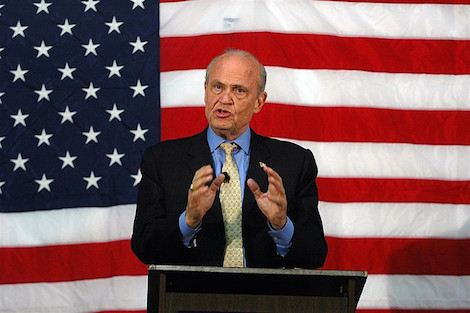 He became best known as a TV actor (and for some, a reverse mortgage pitchman), but landed that career–and subsequently, a career as an elected official–via his participation in the burst of drama in Washington that briefly made television a national civics class, the Watergate hearings, where he was counsel to his fellow Tennessean, Howard Baker.

It’s a bit hard today to understand how a Senate hearing would make a staffer–for the minority team at that–a celebrity. But as WaMo Contributing Editor Matt Cooper reminded us in a 2013 National Journal article marking the 40th anniversary of the Watergate hearings, the hearings dominated American media like nothing since. He notes an incident where Fred Thompson, who died of cancer over the weekend at the age of 73, walked into a restaurant with his wife and was greeted with spontaneous applause.

Thompson turned that celebrity into a lucrative career as a lawyer and lobbyist, and yes, an actor and an elected official. His ultimate preferences were probably best indicated by his decision to give up a U.S. Senate seat for a role on the TV show Law & Order. He was ultimately talked into leaving that show for a presidential campaign in 2007, apparently by associates who convinced him that all he needed to win was a good message and a web page.

The leisurely pace of his 2008 campaign, which expired after he won just enough votes in South Carolina to tip the state–and probably the nomination–to John McCain, became a bit of a legend, and a cautionary tale to candidates without the requisite “fire in the belly.” Maybe this was overstated; my only personal encounter with Thompson was when he hotly denied the tale, which I repeated in a TNR column, that he had shown up for a day of campaigning at the Iowa State Fair wearing “Gucci shoes” and then had chosen to tool around the hot, dusty fairgrounds in a golf cart. Even if the story was, as Thompson insisted, an invention of Fox News reporter Carl Cameron, it was remembered because it fit.

But that wasn’t necessarily a black mark on Thompson’s character. There’s something to be said for a presidential candidate who does not seem to have placed every ounce of his or her being on the altar of ambition, and who clearly found it absurd back in 1973 that restaurant patrons celebrated him for being on TV. He ultimately figured that’s where he belonged. It’s unclear whether or when we’ll again see someone so ambiguously positioned between Washington and Hollywood.