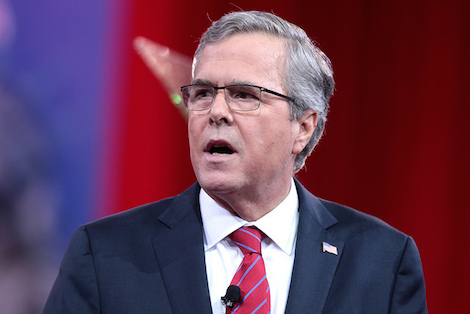 Of all the theories circulating about Jeb Bush’s poor performance so far in this presidential cycle, Buzzfeed‘s Ben Smith may have the most original:

Bush last ran a political campaign in 2002, a sepia-toned political time before bloggers got Dan Rather fired. Back then, the internet was a colorful sideshow, and a slow, elite-dominated media environment favored the sort of politician who wowed big-name newspaper columnists and impressed the hosts of Sunday shows. This weekend, he implored those heroic narrators to write him a “comeback narrative,” attributing to them powers they don’t really have any more.

In 2015, Bush’s political strengths — a discursive, engaged speaking style and a famous name — are weaknesses in a roiling digital space dominated on the right by the quickest, loudest, most self-consciously outsider voices. And his weaknesses hurt more. Bush conceded last week that debates are “not my forte.” (They’ve never been.) Debates, though, now carry outsize importance. They’re the only time you have voters’ attention in this noisy environment.

Now Ben is prone to a bit of an exaggeration on this topic. He was, after all, the guy who wrote a piece immediately following the 2014 election predicting that the 2016 cycle would be the “Facebook Election,” in which social media would displace TV as the primary means by which candidates would project their messages. I’d say that was more than a tad premature.

But I do think the idea that Jeb Bush may have missed some big changes in politics since his last race could have merit, though it might be as much about ideology as technology (with the latter contributing to the former, however).

In 2002 the Bush Boys were the acme of conservative movement politics, representing the family’s successful adaptation to the ideological trends that undermined Poppy’s 1980 and 1992 campaigns (he was pretty much on the beam in 1988). 2002 was the “9/11 election,” the “security moms election,” when George W. Bush was indeed rewarded for “keeping us safe” thanks to widespread expectations of another big attack.

But Karl Rove’s successful formula of fear plus selective tasty treats for swing demographics didn’t work for long, and by the time W. left office conservatives were nearly as disdainful of him as liberals. This is what Jeb may have missed by not being out there on the campaign trail. And from there could come his evident mystification at why rank-and-file conservatives don’t look at his Florida record–or his brother’s memory– and swoon. It may be too late for him to make up for lost time and recover.