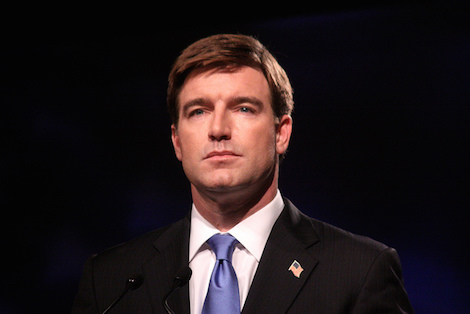 Well, so much for a clear demonstration that poor Democratic performance in downballot races could soon come to an end. It wasn’t a complete debacle, but on the other hand, when your signature partisan achievement is hanging onto one statewide constitutional office in Mississippi, it was no night for Donkeys to be pouring champagne into their drinking troughs, either.

The big surprise was the near-landslide margin whereby proud wingnut Matt Bevin (“This is a great night for Republicans in Kentucky and, more importantly, a great night for conservatives in Kentucky”) defeated Democratic Attorney General Jack Conway in the Kentucky gubernatorial contest. Every recent poll in the race showed Conway with a small lead, though a late RGA ad push and Bevin’s efforts to mobilize conservative evangelicals via his championship of the cause of Kim Davis made predictions a bit shaky. Still, various miscues by Bevin had national Republicans practicing a post-election talking point that he was just a bad candidate who was showing why Mitch McConnell waxed him in a 2014 primary.

Kentucky Democrats also lost a couple of downballot statewide constitutional offices, none more painful than that of State Auditor Adam Edelen, who was positioning himself for a possible challenge to Rand Paul next year.

Over in Virginia, Democrats failed to meet their goal of regaining control of the state Senate. Progressives are also mourning the success of a ballot initiative in Houston that overturned a local anti-discrimination ordinance after a demagogic campaign focused on the idea that transgender folk would menace women and girls in restrooms.

Other than the aforementioned Mississippi Attorney General’s race won by incumbent Jim Hood (even as Republican Gov. Phil Bryant won reelection in a race so noncompetitive that it was hardly noticed nationally), the big victories for Democrats were in Pennsylvania, where they swept three open State Supreme Court seats and reversed GOP control of that body, and in Indianapolis, where Joe Hogsett easily won the mayoral election and Democrats also won a majority on that consolidated urban area’s city-county council.

In non-partisan ballot initiative developments, Ohio’s controversial measure to legalize pot sales but award exclusive rights to grow the weed to a select group of initiative backers was defeated soundly. And in San Francisco, a measure aimed at reversing the rapid growth of Airbnb rentals in the city lost by a sizable margin, though lefty city council gains could lead to a similar measure by ordinance.

We’ll have to see if Democratic hopes of a breakthrough win in the Louisiana gubernatorial runoff on November 21 turn out to be as ephemeral as Conway’s presumed lead in Kentucky. That race could turn on whether David Vitter is an even more terrible candidate than Matt Bevin.