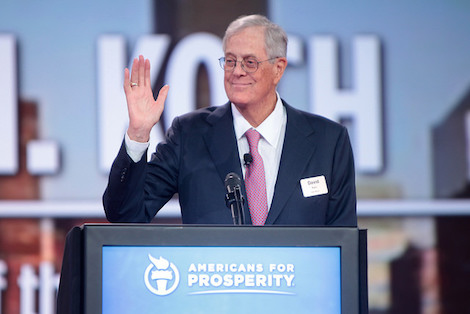 The political network helmed by Charles and David Koch has quietly built a secretive operation that conducts surveillance and intelligence gathering on its liberal opponents, viewing it as a key strategic tool in its efforts to reshape American public life.
The operation, which is little-known even within the Koch network, gathers what Koch insiders refer to as “competitive intelligence” that is used to try to thwart liberal groups and activists, and to identify potential threats to the expansive network.

The competitive intelligence team has a staff of 25, including one former CIA analyst, and operates from one of the non-descript Koch network offices clustered near the Courthouse metro stop in suburban Arlington, Va. It has provided network officials with documents detailing confidential voter-mobilization plans by major Democrat-aligned groups. It also sends regular “intelligence briefing” emails tracking the canvassing, phone-banking and voter-registration efforts of labor unions, environmental groups and their allies, according to documents reviewed by POLITICO and interviews with a half-dozen sources with knowledge of the group.

The competitive intelligence team has gathered on-the-ground intelligence from liberal groups’ canvassing events in an effort to assess the technology and techniques of field efforts to boost Democrats, according to the sources.

Here’s where it gets sketch:

And they say the team utilizes high-tech tactics to track the movements of liberal organizers, including culling geo-data embedded in their social media posts.

Now if this just relates to, say, major GOTV operations on election day, I suppose this is harmless enough. But it sounds maybe a little more ominously regular.

I doubt seriously anyone in KochWorld cares about my whereabouts, but if so, they probably were confused last weekend when I went from Monterey to Las Vegas to Atlanta to Phoenix to San Diego and back to Monterey in an extremely short period of time. I’ll save them from some trouble going forward: I’m not going anywhere until Monday, and then I’m going to New York for the Macy’s Day Parade! Guess I will organize some balloon-watching.