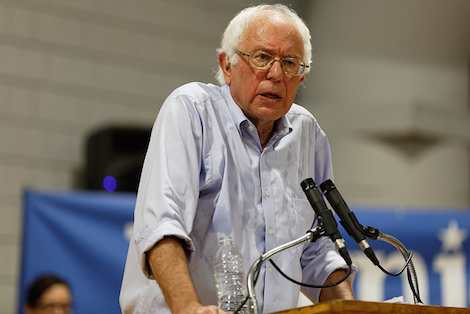 So Bernie Sanders is scheduled to give his so-called “socialism speech” this afternoon, placing his own professed “democratic socialism” in the tradition of FDR, usually thought of as the US’s closest brush with European-style Social Democracy.

The unstated goal of the speech is to address Mr. Sanders’s biggest challenge: electability. While he is running strong among liberals, many other Democrats see him as an anti-establishment protest candidate from the left-wing fringe who isn’t in the party (he is one of two independents in the Senate). They fear they would be wasting their votes choosing him over Hillary Rodham Clinton in the nomination fight, even though some opinion polls show him doing just as well in the 2016 general election as Mrs. Clinton.

That was indeed the case for a while, but a new national poll from PPP that provides head-to-head match-ups of Clinton and Sanders versus various Republicans shows an emerging gap:

Early general election contests are shaping up to be very competitive with Hillary Clinton polling within 2 points of 5 out of 6 Republicans that we tested against her. The only GOP hopeful to actually lead Clinton is Marco Rubio at 45/43. Rubio is also the only candidate in the field with a positive favorability rating among the overall electorate, at 39/37.

I don’t know if that 6 percent is composed of people who reach for the crucifix and garlic at the word “socialism,” but we’ll see how Sanders does with that interesting task later today.