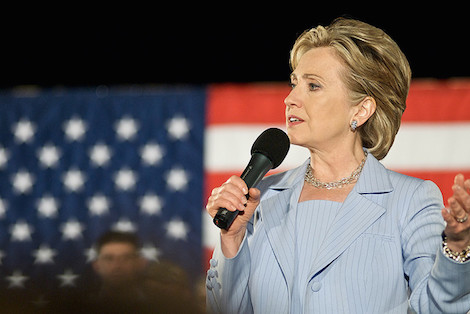 So HIllary Clinton delivered her Big Speech on ISIS at the Council on Foreign Relations in New York today, and probably followed the most logical and politically safe approach of endorsing an intensified version of an Obama administration initiative that’s just under way. And since it also builds on the Sunni tribal strategy that accompanied the famous U.S. troop Surge, it isn’t that vulnerable to Republicans aside from the expected whining about why Obama didn’t just let the Surge go on forever.

In the first “Sunni awakening” in 2007 we were able to provide sufficient support and assurances to the Sunni tribes to persuade them to join us in rooting out al-Qaida. Unfortunately, under Prime Minister Maliki’s rule, those tribes were betrayed and forgotten.

So the task of bringing Sunnis off the sidelines into this new fight will be considerably more difficult. But nonetheless, we need to lay the foundation for a second “Sunni awakening.” We need to put sustained pressure on the government in Baghdad to gets its political house in order, move forward with national reconciliation, and finally, stand up a national guard. Baghdad needs to accept, even embrace, arming Sunni and Kurdish forces in the war against ISIS. But if Baghdad won’t do that, the coalition should do so directly.

So: with or without Baghdad, HRC would equip and presumably bribe Sunni tribes into a fight with ISIS similar to their fight with al Qaeda.

HRC covered some old ground without changing positions, continuing to call for a no-fly zone over Syria and a negotiated end to the Assad regime, with the Russians presumably giving him the heave-ho. She also expressed some anger at the Saudis for their withdrawal from engagement with ISIS, publicly pointing out to them that the Syrian/Iraq theater could become a much larger version of Yemen.

Probably the key thing for HRC politically is that she sounded knowledgable and tough, not totally on the same page with Obama but not competing with GOP demagoguery on refugees either. And in terms of the general electorate, it doesn’t hurt that she’s talking about killing terrorists while Bernie Sanders is defending “democratic socialism.”