* Because the shooters in San Bernardino had pipe bombs, Marco Rubio wants to know why we’re not talking about “bomb control” as a way to dismiss calls for further gun control. Hunter at Daily Kos takes that question right where it belongs…to the woodshed.

You are not allowed to own a bomb, or carry a bomb on your back while visiting your neighborhood Chipotle. Not even if you claim you need a bomb for self-protection, or because you’re afraid there are other people out there with other bombs who might try to bomb you first. We’re not stupid, after all. You cannot buy ready-made bombs at Walmart, because Walmart is not allowed to sell ready-made mass murder devices. Even those Americans that are permitted to own and operate bombs (for example, for excavation purposes) face very, very tight state and federal regulations and restrictions; as for the rest of us, outside of military service we are allowed to be in personal possession of a mass-murder-sized bomb approximately never.

* A new Monmouth University poll in Iowa shows Ted Cruz taking a commanding lead over everyone in that state. We’ll have to wait and see if this poll is an outlier. In the meantime, there’s no time like the present for an “I told you so.”

* Hillary Clinton published an op-ed in the New York Times outlining her plan to “rein in Wall Street.” It’s a good summary of her proposals, but I wasn’t clear who the audience was. Much of what she described will go right over the heads of a lot of Americans.

* The Civil Rights Division at the Department of Justice will investigate whether there is a pattern or practice of discrimination within the Chicago Police Department.

* Merle Weiner explains why “parent partnerships” might be better than “promoting marriage” for improving the wellbeing of children growing up in unmarried parent households.

* Finally, the contrast couldn’t be clearer. Donald Trump issued a hateful call to end all Muslim immigration into the United States the day after President Obama reminded us of this: 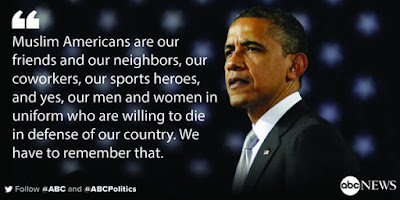