If you needed anymore evidence that $100 million can’t buy you a presidency, take a look at this Gallup report today. 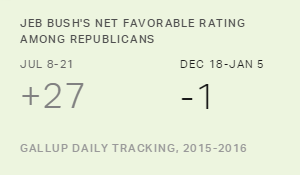 It sure looks to me like the more money Jeb spends, the less people like him. That is basically what Gallup implies.

But Jeb isn’t the only one who is shedding tears today about how their money doesn’t seem to be buying what it used to. Even though Charles and David Koch have announced that they plan to spend almost $900 million on the 2016 election, they are none to happy right now.

In an interview with the Financial Times, the billionaire businessman and philanthropist [Charles Koch], said he’ll eventually support a candidate who he agrees with on some things with, but that it’s hard to get excited. He said a list presented to all the candidates about the Kochs’ political arm’s priorities “doesn’t seem to faze them much. You’d think we could have more influence.”

Let that one sink in for a moment: from the perspective of Charles Koch, the Republican presidential candidates aren’t kowtowing enough to their wishes. Boggles the mind, doesn’t it?

You’d also think that with the millions the Koch brothers spent seeding the development of the Tea Party, those ungrateful rubes would listen to the brothers now on who to nominate as the Republican contender in the 2016 presidential race, wouldn’t you? But no, those folks seem to be clamoring for either Donald Trump or Ted Cruz…neither of which is pleasing to the brothers Koch.

You have my answer in the title 🙂