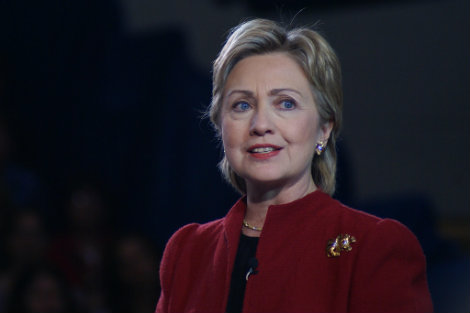 I’m reading a lot about how left-liberal voters will never ever support Hillary Clinton now that she has come out aggressively against her chief rival, Bernie Sanders. Part of me wonders if this is the result of magically thinking that Sanders is as pure as the driven Green Mountain snow.

I admire many if not most of Sanders’ positions, including his pro-gun positions, but I’m hardly convinced that a sitting senator is pure. Purity struggles for air in Washington. Indeed, the Center for Public Integrity reported last week that even Sanders is the beneficiary of “Dark Money.”

I hope to pose here a helpful question that cuts through much of the noise being generated as Democrats fight over who should be the party’s nominee. Here it is: What could a President Sanders do that a President Clinton could not?

Please note that I’m not talking about the issues here. Issues obviously are important, and a focus on the issues indeed reveals small differences between Sanders and Clinton, though they are often exaggerated. No, the question is about what each could accomplish once he or she sat in the Oval Office.

And please bear in mind history. President Barack Obama was elected on the promise to “transform” politics-as-usual. But to get his most significant achievements passed the opposing party required nothing short of politics-as-usual.

This is a question of pragmatism, not a pro-Hillary question. Pragmatism is usually associated with expedience, but it’s more than that. It’s a school of thought original to America.

Pragmatism holds that principles are important — what the candidates say they believe to be right and true — but more important are outcomes. What can be accomplished? Of those accomplishments, what is right and true? Here’s a scholarly definition from the Internet Encyclopedia of Philosophy:

Pragmatism is the “claim that an ideology or proposition is true if it works satisfactorily, that the meaning of a proposition is to be found in the practical consequences of accepting it, and that unpractical ideas are to be rejected.”

With this in mind, what’s the utility of defeating Clinton? Will the outcome of her defeat bring something better?

Many say the outcome would be putting power back into the hands of the people, pushing back against the power of Wall Street, and elevating democracy over oligarchy in America.

To that I say, amen! But that’s entirely beside the point. Democrats, of all people, should know by now that a president’s power is limited. They should know it takes the president’s party to advance bills in Congress. They should know that nothing of statutory significance can be enacted if the opposing party says it does not want to cooperate. Ever.

So tell us, how is a Sanders victory going to accomplish more than a Clinton victory? Since Clinton is the establishment candidate, the burden of proof is on the challenger to make the case that his nomination will accomplish more.

You might say that even if Hillary Clinton won the election that the Republicans would behave exactly as they have since President Obama took office. There is no doubt in my mind. But a president, as the current one is showing, can do a lot to advance progressive principles without Congress.

You might say that a President Sanders can do that too. I think there is no doubt. But first he must win.

To get an idea of the obstacles awaiting a Sanders nomination, consider this: The Republicans fear Clinton. Indeed, according to a report in the Christian Science Monitor, they are even coming to Sanders’ defense as he battles Clinton for the Democratic nomination. The thinking is that helping Sanders now hurts Clinton later, thus increasing the odds for the GOP.

What can Bernie do that Hillary can’t?

Sanders supporters should be asking themselves that question.