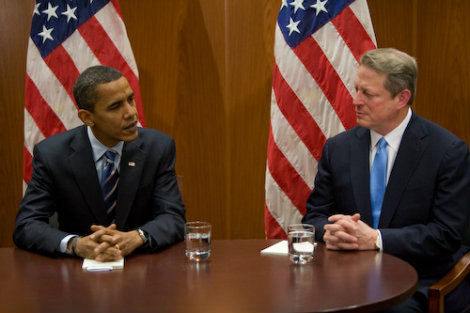 Back in 2000, there was a debate between Al Gore and Bill Bradley held at the Apollo Theater in Harlem. As you might expect, the topics largely focused on things of particular concern to the black community. It was a very contentious debate, but Gore ultimately landed a knockout punch in the following exchange.

GORE: That’s not true either, not true. That’s not true either. Let me respond to this. You know, we’ve had basically the same length career in the Congress, and over the course of that time, I’m proud that I have a better COPE (ph) voting record measured by the support of working men and women and organized labor than Senator Bradley. I compiled that better record in a state in the South where it was not always that easy compared to New Jersey.

Now, do you think that they all have such poor judgment, Senator Bradley?

BRADLEY: What I think is they don’t know your record as a conservative Democrat.

BRADLEY: They — they don’t know that you voted five times over three years for a tax exemption for schools that discriminate on the basis of race. It’s in the record. The Black Caucus stated so.

BRADLEY: It’s there in the record.

GORE: You know what? In my experience, Black Caucus is pretty savvy. They know a lot more than you think they know.

You know, they’re not — black — Congressional Black Caucus is not out there being led around, you know. They know what the score is. And they also know that their brothers and sisters in New Jersey said you were never for them walking the walk, just talking the talk.

It was one of the oldest tricks in the book. Al Gore could point to the polls that showed that he was winning the black vote. He had the endorsement of the Congressional Black Caucus. Was Bill Bradley saying that blacks were stupid or uninformed or just “didn’t know” Al Gore’s record?

Are you calling black people dumb?

Bill Bradley wasn’t calling anyone dumb, but he was suggesting that if black people knew more about Al Gore’s record they’d be less inclined to support him.

Donald Trump uses this kind of thing all the time, although in a slightly different way. He says that people like what he’s saying, that he didn’t make any gaffes, that he won debates, because the polls say he’s winning. If you’re ahead, you can accuse your critics of questioning the intelligence and judgment of the electorate, and any subgroup of the electorate.

It’s elementary politics, and it works until your support dries up and you can no longer argue that the people are with you.

Bill Bradley got roundly booed for suggesting that black people didn’t know Al Gore’s record, and that was the sound bite played from the debate with Howard Dean ‘Aaaarrgh-style’ repetitiveness.

This is history that Sanders should remember, because it’s easy to fall into the same trap. People ask him why blacks are supporting Clinton and the natural response is to say that things will change when people are more knowledgeable about their respective records.

Even if you think that is true, it’s a trap.

The best you can do is to say that you hope to change people’s minds.