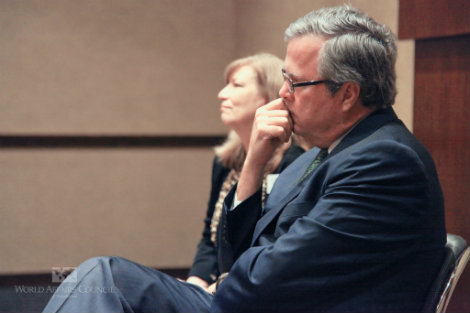 The World Affairs Council of Philadelphia/flickr

If you had any doubts that the Republican presidential race has come down to a contest of machismo, this tweet by the guy who is currently in 5th place among the 6 candidates should remove them.

Here is how Paul Blumenthal responded.

“It is quite unmistakable that all weapons and tools are used as symbols for the male organ” — Freud https://t.co/sNQU18EzEU

Jeet Heer sums it up perfectly.

It’s hard to interpret this tweet as anything other than a response to the constant emasculation that Bush has suffered at the hands of Donald Trump. The real estate mogul has spent months cutting Bush down with insults that suggested the former Florida governor was less than a man.

Jeb Bush should know that he has no chance of out-performing the ultimate bully in Donald Trump on this one. But it says something about both he and Republican base voters that he thinks he should try.

What is fueling this primary right now is the desire to “win” against any opponent to white conservative patriarchal dominance. Any candidate who assumes that people immigrate to this country out of an “act of love” for their families is going to lose that contest…no matter what weapon they chose to represent them.

While that is the contest currently underway on the Republican side, this fall the rest of us will start to weigh in. The question then becomes whether or not we want to take this country back to that kind of retrograde thinking.