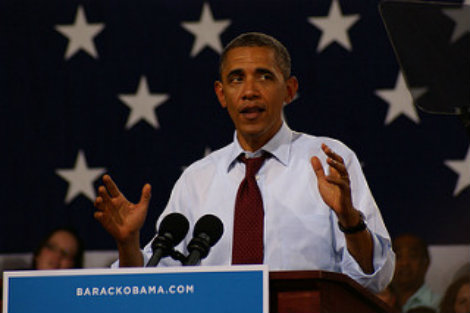 Greg Jaffe has taken an interesting look at how Democrats and Republicans respond very differently to anything President Obama says. To make his point, he zeros in on the President’s most recent State of the Union speech – specifically the part where he talked about our political polarization and called for “a better politics.” In response, a Democratic school teacher from Michigan tweeted this:

Let’s get over the party lines and work together!

Meanwhile, a retired Republican lawyer from Maryland – responding to the same words – tweeted this:

Hearing him complain about political rancor is frankly nauseating.

Here is how the experts describe what is going on:

Americans don’t necessarily disagree more on policy. What has changed is the level of mistrust, and even vitriol, Americans have for politicians and their fellow citizens on the other side of the political divide. It is a suspicion that makes people question their neighbors’ motives, their sincerity and their intelligence.

“What’s changed is people’s perception of other ordinary citizens,” said Doug Ahler, who studied polarization at the University of California at Berkeley. “We’ve become so entrenched in our partisan identities…It’s like a really intense sports rivalry. It’s not about policy but an emotional distrust of the other side.”

When I read that I was immediately reminded of what Marilynne Robinson told President Obama about why she had recently written an essay on fear.

But fear was very much—is on my mind, because I think that the basis of democracy is the willingness to assume well about other people.

You have to assume that basically people want to do the right thing. I think that you can look around society and see that basically people do the right thing. But when people begin to make these conspiracy theories and so on, that make it seem as if what is apparently good is in fact sinister, they never accept the argument that is made for a position that they don’t agree with—you know?…because [of] the idea of the “sinister other.” And I mean, that’s bad under all circumstances. But when it’s brought home, when it becomes part of our own political conversation about ourselves, I think that that really is about as dangerous a development as there could be in terms of whether we continue to be a democracy.

Yesterday I quoted something Obama wrote back in 2005.

Our goal should be to stick to our guns on those core values that make this country great, show a spirit of flexibility and sustained attention that can achieve those goals, and try to create the sort of serious, adult, consensus around our problems that can admit Democrats, Republicans and Independents of good will.

With that, I believe that he summed up how our founders envisioned a democratic republic should work. But how does one do that when people like the retired Republican lawyer in Maryland view those attempts through this lens?

Deep into Obama’s second term, Pettit could feel the country’s mood shifting and turning darker. His dentist insisted to him that Obama was a closeted Muslim — a conviction that Pettit said was absurd.

“It really offends me to hear people talking about a politician’s religion as a problem,” he said, even as he suggested that his dentist’s critique was probably grounded in Obama’s foreign-policy failings.

“I think it’s shorthand for saying Obama is more sympathetic to radical Muslim extremists than he should be,” Pettit said.

I have often suggested that since 2009, the Republican Party has become post-policy. That is because, after their domestic and foreign policies were demonstrated to be utter failures during the Bush presidency, they had a choice to either re-examine them through a pragmatic lens or ignore all the failure and simply drill down with the same-old, same-old. They more or less chose the latter option. But to avoid the kinds of difficult questions we’re seeing now in the presidential race as Donald Trump points to those foreign policy failures, they swept them under the rug and instead fanned the flames of anger and fear about our new President in order to bolster their plan of total obstruction. Thus was the tea party born.

What we are witnessing now is that Democrats are having a robust and often difficult argument in the presidential race over policy differences, while the Republicans seem to be looking for the biggest bully who can take on their object of fear and anger…the two-headed monster of Obama/Clinton. In other words, it is no longer about policy – it’s all a matter of tribalism.

The trouble is that no one really knows how this particular drama ends. I don’t think that it can go on forever. But I also don’t know what it will take to change things. There are some possible outcomes that could be disastrous for all of us. What I DO know is that this is something that is going to be a major focus for President Obama – not just during his remaining year in office, but afterwards as well. Here’s what he told the Illinois General Assembly last week:

The reason this is important to me is, next year I’ll still hold the most important title of all, and that’s the title of citizen. And as an American citizen, I understand that our progress is not inevitable — our progress has never been inevitable. It must be fought for, and won by all of us, with the kind of patriotism that our fellow Illinoisan, Adlai Stevenson, once described not as a “short, frenzied outburst of emotion, but the tranquil and steady dedication of a lifetime.” It requires citizenship and a sense that we are one.

This is what will be a focus of mine over the course of this year and beyond: What can we do, all of us, together, to try to make our politics better?