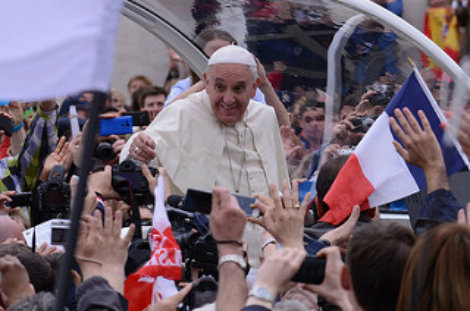 Yesterday, Pope Francis said this after visiting the U.S./Mexican border:

“A person who thinks only about building walls, wherever they may be, and not building bridges, is not Christian.”

When asked whether American Catholics should vote for someone with Trump’s views, here is how he responded:

“I am not going to get involved in that. I say only that this man is not Christian if he has said things like that. We must see if he said things in that way and in this I give the benefit of the doubt.”

In other words, the Pope refused to weigh in on a political question and restricted himself to matters of his faith.

But of course, whenever The Donald is challenged, he has to throw a punch. Which he did – making the bizarre claim that Pope Francis is merely a pawn of the Mexican government.

The Mexican government and its leadership has made many disparaging remarks about me to the Pope, because they want to continue to rip off the United States, both on trade and at the border, and they understand I am totally wise to them. The Pope only heard one side of the story – he didn’t see the crime, the drug trafficking and the negative economic impact the current policies have on the United States. He doesn’t see how Mexican leadership is outsmarting President Obama and our leadership in every aspect of negotiation.

Yesterday, Martin summarized how the Republicans are building walls instead of bridges to almost every group of Americans you can name – except of course, white heterosexual males in Trump’s age group.

And, consider, since 2012 they’ve definitely done damage with their prospects with Latino and Asian voters. They’ve further alienated the academic/scientific/technical/professional class with their anti-science lunacy. They’ve lot the youth vote over a variety of issues, including hostility to gay rights. They’re doing everything they can to maximize the black vote. Muslims will vote almost uniformly against them despite sharing some of their ‘family values.’ Women won’t be impressed if Cruz or Rubio are the nominees because they both oppose abortion including in cases of rape or incest. They’ll be unimpressed with Donald Trump because he’s a sexist, womanizing boor.

And now, if Trump is the Republican nominee, we can add Catholics to the growing list of people he has offended.

Other than white older males, the one group that hasn’t been jettisoned so far are conservative evangelical protestants. Since the Reagan years, they had formed an uneasy alliance with conservative Catholics who supported Republicans primarily because of their position on abortion. But it has always been clear to me, as someone who grew up steeped in anti-Catholicism from the evangelical protestants in my family/community, that this was a fragile partnership. And so it doesn’t surprise me at all to see Franklin Graham (son of evangelist Billy Graham) weighing in with support for Trump.

My advice to the Pontiff—reach out and build a bridge to Donald Trump. Who knows where he may be this time next year!

Republicans – with Donald Trump at the helm – are doing an excellent job of building walls and burning all their bridges behind them.