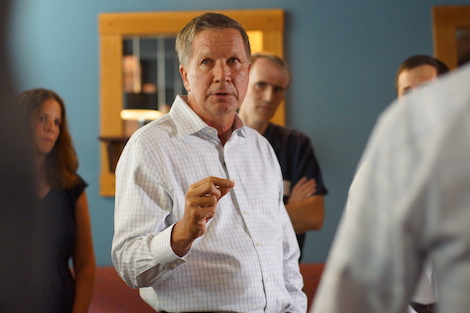 If you’ve watched John Kasich at any of the Republican presidential debates so far, two things stand out about him: (1) he wants to be the “Republican with a heart,” and (2) he completely embraces trickle-down economics. That’s pretty much the kind of thing we heard from George W. Bush in the 2000 election when he called himself a “compassionate conservative.” Compared to the rest of the field this time around, that has a lot of pundits calling Kasich the moderate of the group.

The problem is that we all got a pretty good lesson on the failure of trickle-down economics during the Bush/Cheney years. And right now, Kasich is demonstrating just how un-moderate he is on some important issues. For example, here’s what happened at a town hall event in Virginia today.

Notice that even one of his supporters called him out for saying that “women came out of their kitchens” to work on his campaign. That little gem comes the day after Kasich did this:

The bill targets roughly $1.3 million in funding that Planned Parenthood receives through Ohio’s health department. The money, which is mostly federal, supports initiatives for HIV testing, breast and cervical cancer screenings, and prevention of violence against women.

All of that reminded me of something that happened just after Kasich was elected Governor of Ohio. He came under heavy fire in his home state for the fact that all of the appointments in his administration went to white people. For a Republican, that isn’t terribly surprising. But it was his response that was jarring. Instead of working with communities of color to improve, he got defensive.

Kasich said he’s color blind when it comes to hiring.

“I mean let’s get the best people for the job,” said Kasich.

In other words, “the best people for the job” just happened to all be white. People of color need not apply. When Ohio’s Legislative Black Caucus offered to help him out with that, Kasich said, “I don’t need your people.”

So the moderate in the Republican presidential race is the guy who believes that:

1. if we just give rich people more tax cuts our economy will boom for everyone,
2. women are still in the kitchen and don’t deserve access to reproductive health care, and
3. the best person for any job in his administration just so happens to be white.

I’ll grant you that compared to the other 4 candidates still in this race, Kasich is slightly less extreme. But then, I’m old enough to remember what happened the last time the country had a “compassionately conservative” president.