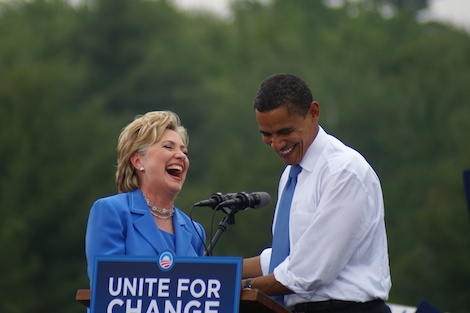 As recently as a few months ago, the rap on Hillary Clinton was that she was “distancing herself” from Barack Obama. She would make a statement or release a policy paper and immediately the press would pounce on it as evidence of this alleged “distancing.” When she gave a speech at the Council of Foreign Relations in late November about the need to confront ISIS in Syria she was “putting space between herself and President Obama,” even though, in fact, she’d had well-known differences with Obama on Syria back when she was secretary of state and what she said in that speech was pretty much just a restatement of those differences, which weren’t actually all that great to begin with. When she announced her opposition to the Keystone pipeline she was “distancing herself from the president,” even though the Obama administration in fact hadn’t yet issued a ruling on the pipeline and when it did six months later it took the same position as Hillary and killed it.

I never quite understood the underlying assumption of these pieces, which was that Hillary had a lot to gain politically from “distancing” herself from Obama. The president’s approval rating has been pretty good (especially among Democrats), the economy’s been doing ok, and she was, you know, in his administration. Where, exactly, was the advantage for her in distancing herself from him? Also, I suspect she believes, like most Clintonites I know, that Al Gore did himself no favors in 2000, and may in fact have lost the election, by trying to distance himself from Bill Clinton and the Clinton/Gore record. Seemed to me reporters were just saying this stuff about distancing to sound smart and because everyone else was saying it.

In any event, nobody’s saying it now. In fact, the CW has flipped 180 degrees. The smart thing to say now is that Hillary is “positioning herself as a dogged, vocal defender of the president” in order to blunt Sanders attacks, or that she “played the Obama card” in a recent debate by mentioning the president’s name ten times before Bernie Sanders did once. Embracing Obama is now seen as the shrewd, even cynical, move—Bernie Sanders even accused her of doing so in order to pander to African Americans.

And no doubt it is smart for Hillary to align herself with Obama. As Greg Sargent noted yesterday:

In Nevada, more voters wanted to “generally continue Barack Obama’s policies” than wanted to “change to more liberal policies” by a 50-41 margin. Clinton won among that former group, by 75-22, while Sanders won among the latter group by 77-21.

The point, though, is that the reason she’s able to “embrace” Obama is that she and he have more or less the same positions on the issues. This was as true six months ago as it is now. I’m not sure why reporters have so much trouble seeing or acknowledging this plain fact, though their relentless focus on positioning and strategy probably has something to do with it.