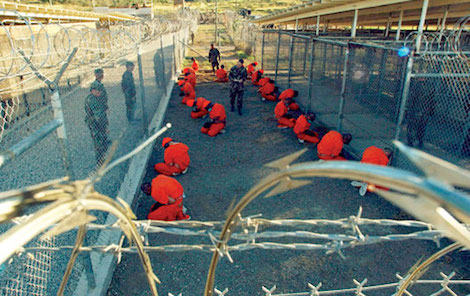 The Republicans have a strange emotional attachment to keeping the prison at Guantanamo Bay open for the foreseeable future. As an explanation, I kind of discount actual fear that the inmates might escape from a super maximum security prison in the United States. I know they fan that fear whenever the subject of closing Gitmo comes up, but I believe this is just a tactic.

Maybe they just don’t want to admit that they were wrong to support the Cuban prison in the first place. That certainly seems to animate the most vocal opponents who also are the most notorious neoconservative members of the Senate.

Take a look at how they’re responding to the administration’s just-announced plan to close the notorious facility:

Senator John McCain, the Arizona Republican who chairs the armed services committee, all but rejected a plan he himself has urged the administration to submit. McCain has shifted his positions on Guantánamo from the Bush to the Obama administrations, but has positioned himself as the last gasp of Obama’s ambitions to win congressional support.

McCain, while pledging to look at the plan in hearings, termed it “a vague menu of options, not a credible plan for closing Guantánamo, let alone a coherent policy to deal with future terrorist detainees,” and said Obama had “missed a major chance”.

Senator Kelly Ayotte, a New Hampshire Republican on the armed services committee, preemptively rejected the final proposal in a statement.

“The president is doubling down on a dangerous plan to close Guantánamo – a move that I will continue to fight in the Senate,” Ayotte said.

Then there’s Marco Rubio, who is already criticizing the plan on the campaign trail, saying that not only shouldn’t the prison close, but we should never give the property at Gitmo back to a “communist dictatorship.”

I don’t expect Congress to act on the president’s plan. Maybe Obama will act after the November election when he’s truly a lame duck. What are they gonna do? Impeach him?