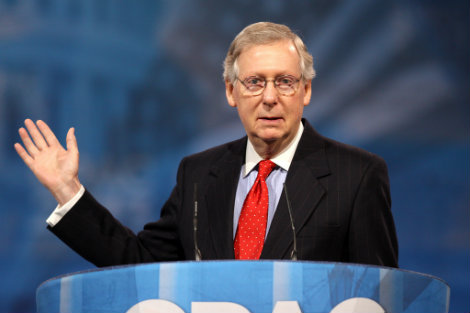 Only an hour after Antonin Scalia’s death had been confirmed, Sen. Majority Leader McConnell announced that there would be no vote on a nominee from President Obama to replace him. Earlier this week, Republican members of the Senate Judiciary Committee said that there would be no confirmation hearings on the nominee. Then yesterday, Republican Senators began announcing that they would not even meet with the nominee. All of this is happening before the President has even announced his choice.

You might be tempted to ask, “what is the strategy behind the Republican’s decision to become the party of no, no and no?” Republican strategist Rory Cooper explained that the goal is to pretend that “we have already reached the conclusion of the debate.” He suggests that to argue the credentials of the nominee would be “to give up a critical piece of leverage in how this is portrayed in the media.” Republicans must keep it “a debate over a process, not a person” and the “story must be starved of oxygen.”

To perhaps test that resolve, an anonymous source told the Washington Post yesterday that Republican Governor Brian Sandoval was being considered. A spokesman for McConnell reacted immediately.

Would McConnell consider Sandoval nom? No. @StewSays: “The Leader didn’t say the Senate would act ‘if’ it was a certain type of nominee.”

And freshman Senator Deb Fischer demonstrated that she had gotten the memo.

Just asked Deb Fischer, Nebraska Republican, if she’d consider Sandoval as a Supreme Court nom. She said no. “It’s not about the person.”

Does anyone else think that all of this reeks of desperation? Josh Marshall sure does.

I think they protest way, way too much about the brittleness of their position and the potential electoral fallout. The emphaticness of the “three nos” isn’t really necessary to convince anyone at this point. It’s to make the point so ferociously, totally, almost maniacally that they can actually end the debate now. But I doubt they actually can.

When it comes to power, Senate Republicans maintain the ability to block any potential nominee President Obama puts forward. But their “three nos” strategy has telegraphed their weak point for all to see…the very real possibility of an extremely qualified nominee. That plays right into the hands of President Obama’s most likely strategy – to pragmatically chose the most qualified person. As Marshall says, from there – the job of the Democrats is pretty easy.

So let’s start with this. Republican senators won’t meet with the nominee. We get it. But I’m pretty sure Democratic senators will meet with him or her and make quite a show of it. I’m also fairly sure the White House will keep trying to set up meetings with Republican Senators and make a show of the on-going refusals. Senate challengers will press it in their campaigns too. And I have little doubt the White House will be sure to arrange meetings with the couple Republican senators who’ve so far bucked the unified front.

The Republicans are placing all their bets on their ability to shut down media discussion of the nominee once their name is announced. Given the importance of this issue, that is a tall order – even for them. But because their base has communicated that nothing – not even control of the Senate – is as important as obstructing this nomination process, its probably the only play they have.

Recently Alec MacGillis wrote a brief profile of Mitch McConnell and why he has chosen this fight. In the end, it’s clear that he didn’t…the fight chose him. This description pretty much encapsulates what the Majority Leader is all about.

The best way to understand Addison Mitchell McConnell Jr. has been to recognize that he is not a conservative ideologue, but rather the epitome of the permanent campaign of Washington: What matters most isn’t so much what you do in office, but if you can win again.

In other words, as Majority Leader, McConnell is in the position of having to draw a line in the sand about conservative influence on the Supreme Court. To do so, the only play he has is the one that puts winning the Senate again in jeopardy. As the President might say, “Please proceed, Majority Leader.”