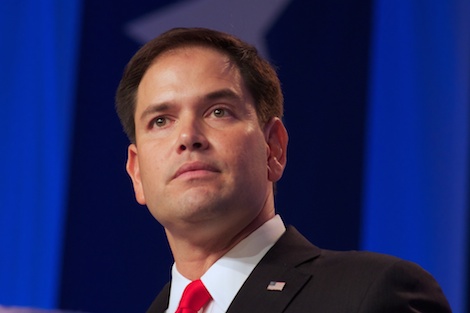 One thing I used to debate with Ed Kilgore about was whether or not we’re stuck in a 40-40 nation where any major party candidate will be assured of finishing relatively close in a presidential election or whether we’re entering into a turbulent time where one party may utterly lose the political argument and go down Goldwater-McGovern-Mondale style.

I was more open to the latter possibility than Ed, but that was last year and things have gotten steadily crazier since.

Not too long ago, I was criticizing Nate Silver for discounting Trump’s chances of winning the Republican nomination. Now he’s talking realignment.

Rather than do another deep analysis here, I want to start a discussion.

I have a theory that the Republicans rely heavily on their ability to stay on message and keep united behind narratives. Obviously, they have their own cable news network and they dominate political radio, so they have some advantages over the left in terms of their ability to promulgate their messages. I think, however, that the effectiveness of their politics depends heavily on the cohesiveness of their movement. If all their media platforms are rowing together, it works so well that they can convert their voters to climate change skeptics overnight. But, when they start suffering from internal divisions, I think the hive (colony?) mind gets disrupted like when you kick over an ant hill.

My theory is that they’re so reliant on this ability to move people from message to message that they can’t operate without it.

Now, things are always messy during a contested primary season, but if the Republicans can’t unite around a nominee then this problem won’t go away after their convention in Cleveland.

This is kind of how I see the mechanism of their collapse working. If they are about to lose a realigning election, this is going to be one of the prime reasons why.

In other words, it’s not just defections for reasons of ideology, but an inability to campaign coherently and with focus.

So, do you think I am on to something?