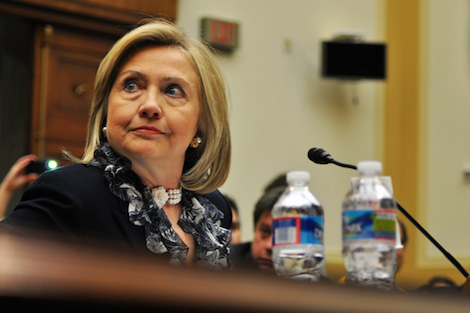 When the idea of intervening in Libya first arose about exactly five years ago, I immediately and vociferously objected and warned of “tribal rivalry and chaos” in a post-Gaddafi world.

Initially, I was concerned that we’d start off small and get sucked into a larger effort when Gaddafi didn’t immediately fall. But, all along, I had the aftermath in mind.

Let me say this again. We don’t know what kind of leadership would emerge from this opposition if they were to prevail, but they don’t even appear to have operational leadership in the field. We have no compelling reason to commit ourselves to this fight. It’s a mistake. And the president has been pushed very far out on a limb here, probably through a false sense of momentum arising from the successful revolutions in Tunisia and Egypt. It will be painful to walk this back, but unless Hillary Clinton discovers a compelling, organized opposition in Benghazi when she arrives there this week, our commitment to regime change in Libya should be scaled back. It’s not our problem. Obama is in the process of making it our problem. We should stand ready to prevent massacres and offer asylum, but should not commit our military to do what the rebels cannot do themselves. If we want to pursue other angles, like seeking out potential alternatives to Gaddafi from within his circle, that seems to me to be unwise but still preferable to getting into a civil war on the side that our intelligence director says is likely to lose. Once we commit a tiny bit, we’ll wind up doing the fighting because we can’t afford to lose.

But what will we have won? Good will? Don’t be silly.

I was relieved when Russia agreed to authorize a United Nations resolution (which they later bitterly regretted) and the president made it clear that we’d be “leading from behind” and letting the Europeans take on a lot of responsibility. By October 2011, I was willing to give the president a little credit for taking out Gaddafi without too much expense, no casualties, and without doing too much arming of the rebels. Things had gone better than I feared they would.

But this was temporary and basically an illusion.

A year ago, I recapped my opposition to and evolution on our intervention in Libya, so I don’t need to reinvent the wheel here. My position at the outset can be summed up as “it isn’t humanitarian to arm a country up for a prolonged civil war that kills many more people and leaves more destruction than anything that you prevented in the first place.” I was opposed to doing regime change in Libya, but was mostly concerned about arming Libyans to do the job. In the end, it didn’t matter because Gaddafi had so many weapons that, when he fell, my nightmare scenario came to fruition even without our arms.

The covert coals-to-Newcastle effort to arm the rebels during the revolution was the least of it. The dictator had stashed an astonishing quantity of weapons in the desert.

“We knew he had a lot, but he had 10 times that,” said Jean-David Levitte, then a top aide to Mr. Sarkozy.

While the C.I.A. moved quickly to secure Colonel Qaddafi’s chemical weapons, other efforts fell short. “There was one arsenal that we thought had 20,000 shoulder-fired, surface-to-air missiles, SA-7s, that basically just disappeared into the maw of the Middle East and North Africa,” recalled Robert M. Gates, the American defense secretary at the time…

…The weapons that had made it so hard to stabilize Libya were turning up in Syria, Tunisia, Algeria, Mali, Niger, Chad, Nigeria, Somalia, Sudan, Egypt and Gaza, often in the hands of terrorists, insurgents or criminals.

In the fall of 2012, American intelligence agencies produced a classified assessment of the proliferation of arms from Libya. “It was like, ‘Oh, my God,’” said Michael T. Flynn, then head of the Defense Intelligence Agency. “We’ve not had that kind of proliferation of weapons since really the end of the Vietnam War.”

Look, I take no pleasure in saying “I told you so” on something like this. The only reason I bring this up is so people can’t use the Condoleezza Rice excuse that “no one could have predicted” that things could (and most likely, would) go terribly wrong in Libya after Gaddafi left power and that we didn’t want to be responsible for that.

How much responsibility does Hillary Clinton have for this fiasco?

I don’t think her supporters really want to start looking at that question. In my opinion, the president’s instincts were right and things would have been considerably worse for us if he hadn’t been aggressive in limiting our investment. But the pressure was overwhelming for us to intervene. And we can’t ignore Clinton’s role:

President Obama was deeply wary of another military venture in a Muslim country. Most of his senior advisers were telling him to stay out. Still, he dispatched Mrs. Clinton to sound out Mr. Jibril, a leader of the Libyan opposition. Their late-night meeting on March 14, 2011, would be the first chance for a top American official to get a sense of whom, exactly, the United States was being asked to support.

In her suite at the Westin, she and Mr. Jibril, a political scientist with a doctorate from the University of Pittsburgh, spoke at length about the fast-moving military situation in Libya…

…Mrs. Clinton was won over. Opposition leaders “said all the right things about supporting democracy and inclusivity and building Libyan institutions, providing some hope that we might be able to pull this off,” said Philip H. Gordon, one of her assistant secretaries. “They gave us what we wanted to hear. And you do want to believe.”

Her conviction would be critical in persuading Mr. Obama to join allies in bombing Colonel Qaddafi’s forces. In fact, Mr. Obama’s defense secretary, Robert M. Gates, would later say that in a “51-49” decision, it was Mrs. Clinton’s support that put the ambivalent president over the line.

It’s beyond the scope of this piece to discuss Clinton’s recommendations on Syria that the president thankfully rejected.

I hear people make all kinds of arguments. Some say that Clinton is far to the right of the president. Others say that they are clones of each other. But, where it really matters, like on issues of military engagement, they are unquestionably different people. Clinton is more interventionist.

For many, many people, this was the decisive distinction between them in the 2008 campaign. And, for a lot of those same people, it’s the big nagging doubt that is preventing them from getting wholeheartedly behind her candidacy now.