I guess it’s no surprise that Cleveland needs to spend some money on crowd control for the July 18-21, 2016 Republican National Convention. 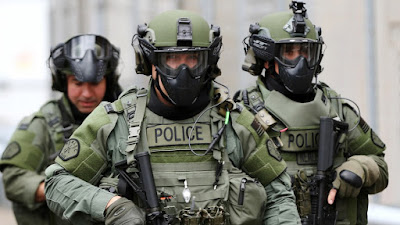 Cleveland is seeking to buy 2,000 sets of riot gear, including riot-control suits and collapsible batons, as part of the city’s latest move to spend a $50 million federal security grant for July’s Republican National Convention.

The city this week posted to its contracting website a notice seeking bidders to provide the gear. City documents refer to the “Elite Defender” riot-control suit manufactured by HWI Gear and a 26-inch baton manufactured by Monadnock, plus 2,000 bags to carry them.

The city also wants to buy 310 sets of riot-control gear — long-sleeve jackets, gloves and shin guards — that would be suitable for use by police riding bicycles.

But I don’t know how many people realized that this is all going to be needed to keep the peace inside the Quicken Loans Arena.