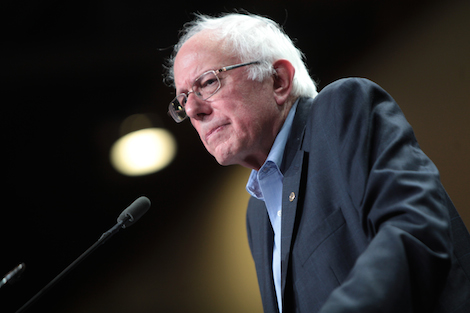 The stunner for Democrats in this presidential primary happened yesterday in Michigan. Here’s what Harry Enten at FiveThirtyEight wrote about it:

Bernie Sanders made folks like me eat a stack of humble pie on Tuesday night. He won the Michigan primary over Hillary Clinton, 50 percent to 48 percent, when not a single poll taken over the last month had Clinton leading by less than 5 percentage points. In fact, many had her lead at 20 percentage points or higher. Sanders’s win in Michigan was one of the greatest upsets in modern political history.

Once Sanders supporters are done celebrating, it behooves us all to try to understand what happened in Michigan yesterday. Questions arise about whether polling in other states is as wrong as it was in Michigan. We’re going to see an awful lot of chatter about that over the next few days in the lead-up to primaries in states like Florida, Illinois and Ohio (where polls show Clinton leading by fairly large margins).

If we look at the exit polls from Michigan, we see trends that are similar to other states. Sanders won among men and those under 45, while Clinton won among women and those 45 and older. While Clinton once again won with non-white voters (62%), Sanders did a bit better than he has in other states by getting 35% (31% among Black voters).

But I would suggest that the big number that explains why the polls were so wrong is that 28% of those who voted in Michigan’s Democratic primary yesterday were independents. And they went for Sanders by a whopping 71% – while Clinton won with registered Democrats. This is something we’ve seen happen in all the states that have open primaries. The question this raises is whether or not pollsters are capturing independents in their “likely voter” screens (especially young independents who haven’t voted in previous elections).

If that is the issue, we could see similar problems with the polls for upcoming states like Ohio and Illinois – which have open (or semi-open) primaries – but not in Florida, where the primary is closed. So that’s something to keep an eye on.

The other thing we learned yesterday comes from the fact that there was a second Democratic primary – in Mississippi – where Clinton won 83-17. Unlike the electoral college in the general election, “winning” a state is not the issue. It’s the delegates that count. And when we look at that one, Clinton won yesterday with 87 to Sanders’ 69.

This demonstrates the incredible uphill battle the Sanders campaign faces. Even if we ignore the contentious superdelegates, Clinton leads so far 745 to 540 (60%/40%). Even “losing” Michigan last night, she won 58 delegates to Sanders’ 65. It will be very difficult for Sanders to make up ground on the delegate count with close wins like the one in Michigan yesterday.