* If you are tempted to doubt the efficacy of President Obama’s preference for taking the high ground, check out what Ron “I always blame both sides” Fournier tweeted following Sen. McConnell’s reaction to the nomination of Judge Merrick Garland.

Objective as possible, I rarely come across a story where one side deserves 100% of blame. Congrats, GOP. You’ve stumped me with #SCOTUS

* What happens when Fox News schedules a Republican presidential debate and the nominees refuse to show up?

The next Republican presidential debate, scheduled for Monday in Salt Lake City, was cancelled after frontrunner Donald Trump said he would skip the event, Fox News confirmed Wednesday.

Fox News executive vice president Michael Clemente confirmed the cancellation in a statement, saying after Ohio Gov. John Kasich said he wouldn’t attend the event without Trump, “there needs to be more than one participant.”

* Given that most of the complaints about the role of superdelegates in the Democratic presidential nomination process have come from the Sanders camp, this is a really odd turn of events.

But Sanders campaign aides say they’ll be able to keep Clinton from reaching the 2,383 delegate magic number she’d need to clinch the nomination at the convention and, by being close enough, convince the superdelegates to switch, as some did when they changed from Clinton to Barack Obama in 2008.

* Recently I noted that President Obama had taken the unusual step of endorsing a primary challenger to a state Democratic representative in his home state of Illinois. Here’s how that turned out.

A primary challenger backed by President Barack Obama defeated an incumbent Democratic legislator in Chicago Tuesday, in a rare example of a president endorsing against a sitting officeholder in his own party.

Juliana Stratton, the state House candidate whom Obama endorsed last week, defeated state Rep. Ken Dunkin in a Democratic primary landslide. With 61 percent of the vote counted, Stratton was leading with 68 percent of the vote to Dunkin’s 32 percent.

Stratton’s victory gives state legislative Democrats a more reliable ally than they had in Dunkin, who infuriated them by splitting with the party last year on two major bills concerning social services funding.

* Finally, if you’ve got a buck twenty-nine to spare, you might want to consider downloading the song “This Is For My Girls” that includes vocals by Kelly Clarkson, Missy Elliott, Diane Warren, Zendaya, Janelle Monae, Lea Michele, Kelly Rowland, Jadagrace and Chloe & Halle. It was commissioned by First Lady Michelle Obama and the proceeds go to support her “Let Girls Learn” initiative. 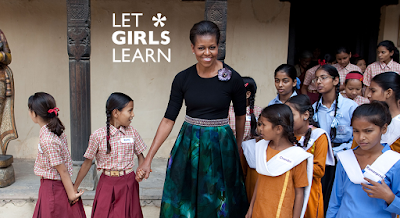