As I was writing this morning about the short-sightedness of establishment Republicans, it struck me that they could learn something from President Obama. What we’re witnessing right now in the GOP presidential primary is a party that has been captured by its angry extremist wing. To a lesser extent, President Obama has been pressured by liberal activists. But while he shares many of their goals, he has consistently embraced a long view of how real change actually happens.

One of the ways we saw this tension early on in the Obama presidency was when activists in the LGBT community became angry with him for not signing an executive order to end DADT. You might remember that some of them chained themselves to the White House fence and made headlines for telling gays and lesbians that Obama “just wasn’t that into them.” What those folks missed was that this President was playing the long game. Here is how he explained it in 2013 to Franklin Foer and Chris Hughes:

There were advocates in the LGBT community who were furious at me, saying, “Why don’t you just sign with a pen ordering the Pentagon to do this?” And my argument was that we could build a coalition to get this done, that having the Pentagon on our side and having them work through that process so that they felt confident they could continue to carry out their missions effectively would make it last and make it work for the brave men and women, gays and lesbians, who were serving not just now but in the future.

And the proof of the pudding here is that not only did we get the law passed, but it’s caused almost no controversy. It’s been almost thoroughly embraced, whereas had I just moved ahead with an executive order, there would have been a huge blowback that might have set back the cause for a long time.

What this kind of long term approach requires is that, first of all, you have to know yourself and set your sights on your North Star. I found that President Obama’s description of that to participants in his My Brother’s Keeper initiative was extremely insightful.

But I do think that as you get older part of what you have to determine is what’s important to you — who are you, how do you want to live, what are the principles that you abide by, what are the kind of fixed foundations, what’s the North Star that steers you — so that when things happen that aren’t always according to plan, and when you have tough times and when you are struggling, what is it that’s going to keep you going and keep your bearings.

And I think through trial and error and mistakes and self-reflection, over time I’ve sort of figured out who I am and what’s important to me and what I care about. And I try to stay focused on that…There are different paths to it, but at some point, to be a man or a woman, to be an adult, to be a full-grown person, you have to move beyond just what other people think and you have to make a determination about what do you believe in.

Secondly, you have to understand how change happens in a democracy. Here is how the President described that to Marc Maron:

The trajectory of progress comes in fits and starts and where you’re going is balanced by what is and where you’ve been. Progress in a democracy is never instantaneous and it’s always partial…

It’s like steering an ocean liner and making a 2 degree turn so that 10 years from now we’re suddenly in a very different place. You can’t turn 50 degrees all at once because that’s not how societies – especially democracies – work. As long as we’re turning in the right direction and we’re making progress, government is working like its supposed to.

As Michelle Obama once said about her husband, the next step sometimes means blocking out the “noise.”

Here’s the thing about my husband: even in the toughest moments, when it seems like all is lost, Barack Obama never loses sight of the end goal. He never lets himself get distracted by the chatter and the noise, even if it comes from some of his best supporters. He just keeps moving forward.

And in those moments when we’re all sweating it, when we’re worried that the bill won’t pass or the negotiation will fall through, Barack always reminds me that we’re playing a long game here. He reminds me that change is slow — it doesn’t happen overnight.

With all that in mind it is obvious why Republicans are in such a political mess right now. For years they masked their true North Star with racist dog whistles and a culture war that was designed to ignite and distract their base. Or as David Roberts described it, they practiced post-truth politics.

In short, Republicans have mastered post-truth politics. They’ve realized that their rhetoric doesn’t have to bear any connection to their policy agenda.

When that charade failed after 8 years of George W. Bush, they moved on to post-policy – or an attempt to fuel their total obstruction by fanning the flames of fear and anger at our first African American president.

Now that lack of a North Star combined with a complete abdication of their responsibilities to govern in a democracy have them chasing after whatever it is they think will inflame their base for short-term gain.

At this point I find myself actually agreeing with something Jonah Goldberg wrote (yes, it totally creeps me out to say that) in a column very accurately titled: Nominating Donald Trump will end the Republican Party as we know it. So will not nominating him.

Trump’s cheerleaders insist that he’s a symptom of long simmering maladies on the right. I’m persuaded (even though I think Dr. Trump’s remedies are nothing but snake oil). Even now too many GOP leaders think Trump’s success is purely a result of his brash personality, and nothing more. But only when we accept that a terrible diagnosis is real is it possible to think intelligently about our options.

If we were to ask our magic 8-ball about the possibility that Republicans will accept this terrible diagnosis and think intelligently about their options, I suspect that even the most optimistic among us would turn up this one. 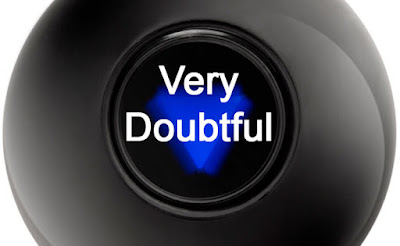 Unfortunately for the rest of us, until they do, they’ll probably continue their current trajectory: Dubya to Palin to Trump to ?