One of the lesser-discussed controversies about President Obama is whether or not he qualifies as a jock or a nerd. We all know that he loves sports (both as a spectator and participant) and is quite competitive. But I remember that early on in his presidency, the nerds of the world were pretty excited about finally having one of their own in the White House. That was true for a resident blogger right here at Political Animal.

For the record, President Obama has collected Spider-Man comics; he knows the name of Superman’s father; he’s a fan of Star Trek; and can, rather effortlessly, offer a Vulcan salute.

Obama is by far the most culturally awesome president this country has witnessed. That doesn’t mean his presidency won’t be a catastrophic failure. But, if anything, the press has been much too restrained in their commentary on Obama’s virtues. Forget beers: This is a president I could play Halo 3 with.

But perhaps the greatest disquisition on President Obama’s nerdiness came from John Hodgman’s speech at the 2009 Radio and TV Correspondent’s Dinner. It was hilarious with a powerfully serious kicker at the end.

This week, the President sets out to let his nerd flag fly. First of all, he will host the 6th annual White House Science Fair this week. That will, no doubt, lead to more photos like this one from the 2012 event (seriously…only a true geek gets this excited about a marshmallow air canon). 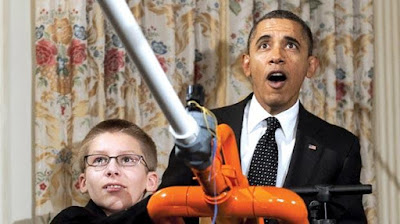 On a more serious note, President Obama has done a lot to promote science during his administration – particularly when it comes to encouraging the next generation of scientists, engineers, mathematicians, and innovators. He has even gone so far as to suggest that they deserve as much attention as our famed jocks.

“As a society, we have to celebrate outstanding work by young people in science at least as much as we do Super Bowl winners. Because superstar biologists and engineers and rocket scientists and robot-builders… they’re what’s going to transform our society. They’re the folks who are going to come up with cures for diseases and new sources of energy, and help us build healthier, more successful societies.” -President Obama