* Today Hillary Clinton put out a plan to fight for environmental and climate justice. The first of eight items in the plan prompted a “Be still my heart!” from Kevin Drum.

Clinton will establish a Presidential Commission on Childhood Lead Exposure and charge it with writing a national plan to eliminate the risk of lead exposure from paint, pipes, and soil within five years; align state, local and philanthropic resources with federal initiatives; implement best prevention practices based on current science; and leverage new financial resources such as lead safe tax credits. Clinton will direct every federal agency to adopt the Commission’s recommendations, make sure our public water systems are following appropriate lead safety guidelines, and leverage federal, state, local, and philanthropic resources, including up to $5 billion in federal dollars, to replace lead paint, windows, and doors in homes, schools, and child care centers and remediate lead-contaminated soil.

* This chart pretty much sums up how Obamacare is working exactly as planned.

* James Fallows points to an article by Ted Gioia two years ago that discusses a book written in 1929 by Jose Ortega y Gasset titled: The Revolt of the Masses. If you followed all that, here’s a clip from Gioia’s article to explain why it’s relevant today.

The key driver of change, as Ortega sees it, comes from a shocking attitude characteristic of the modern age—or, at least, Ortega was shocked. Put simply, the masses hate experts. If forced to choose between the advice of the learned and the vague impressions of other people just like themselves, the masses invariably turn to the latter. The upper elite still try to pronounce judgments and lead, but fewer and fewer of those down below pay attention.

Above all, the favorite source of wisdom for the masses, in Ortega’s schema, is their own strident opinions. “Why should he listen, when he has all the answers, everything he needs to know?” Ortega writes. “It is no longer the season to listen, but on the contrary, a time to pass judgment, to pronounce sentence, to issue proclamations.”

* It should come as no surprise to anyone that, after the drubbing he took from President Obama in 2011, Trump made this announcement today.

The Republican presidential frontrunner told The Hill in an interview published Wednesday that he would not attend the [White House Correspondent’s] annual dinner despite the many invitations he has received from media outlets.

* Finally, from Pete Souza in the Oval Office yesterday comes this photographic evidence that the Republicans are right: President Obama continually insists on bowing to others. Or…#ObamaLovesKids. 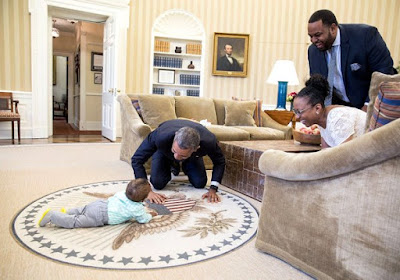