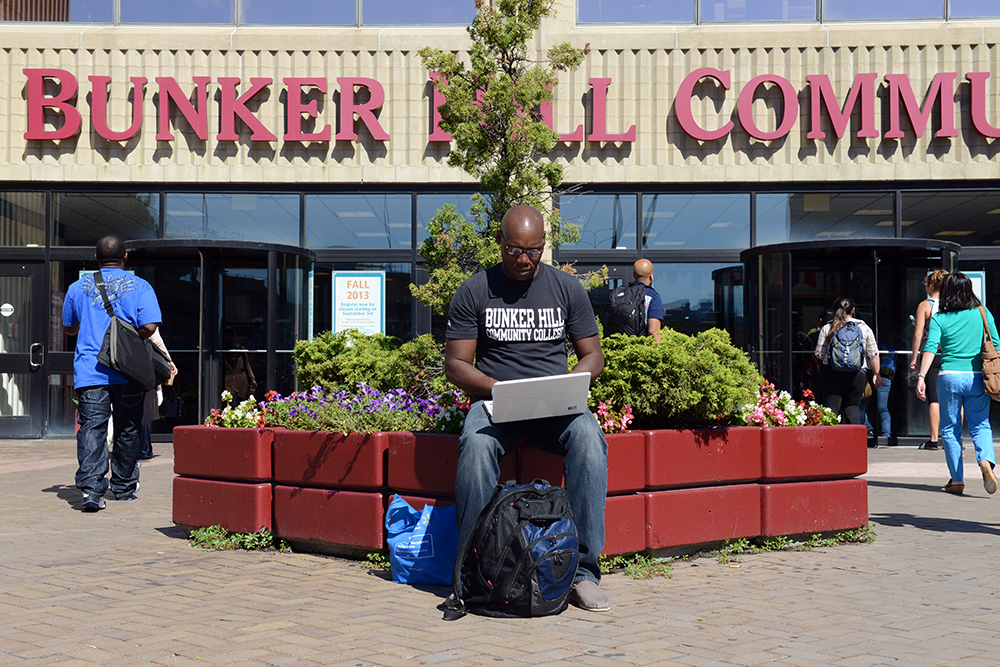 A student works on his laptop outside Bunker Hill Community College in Charlestown. (Meredith Nierman/WGBH)

Last week, Mayor Walsh announced that starting June, 2016, high school students who graduate from Boston Public Schools with at least a 2.2 GPA and can demonstrate financial need, won’t have to pay a dime if they enroll at either Bunker Hill Community College or Roxbury Community College – the city’s two community colleges.

“There’s no excuse why we don’t have more kids participating in… four-year college once we get them through the community college process. We have a couple of great community colleges here in the city of Boston and it’s the way to go,” Walsh said.

But the mayor provided few other details on how many BPS graduates would qualify for the program, and what costs might fall on taxpayers.

“The truth is that this design of a free college plan, like others, will not reach that many students,” said education consultant Richard Kazis.

Only those community college students who keep their grades up, can demonstrate financial need, and pass a placement test would be eligible to receive the benefit.

“There aren’t that many people coming out of the BPS who are going to qualify,” Kazis said.

The other problem, Kazis points out, is that Walsh’s plan is designed to cover tuition – about $500 per year, which is just a portion of the total cost.

“Full cost of attending, including fees and books, is more like $5,000 or $6,000 a year at Bunker Hill or Roxbury or any community college in Massachusetts,” Kazis said.

The City admits the program is just a first step.

Later this year, the mayor is expected to announce other proposals that deal with student support.