A couple of weeks ago, I gathered together what writers like Paul Krugman, Matt Yglesias and Zachary Goldfarb were saying about the progress President Obama is making on reducing income inequality. This week the Congressional Budget Office released a report that affirmed their arguments. As Derek Thompson points out, it contains good news and bad news. When it comes to “market income” (pre-government intervention), inequality continues to rise. But if you include government tax and transfer policies, here’s the kicker:

The upshot is that the federal government is doing more to correct inequality right now than at any time in the last 35 years. The five years when tax and transfer policies took the biggest bite out of inequality were the first five years of Obama’s presidency.

This is how that looks in graph form using the GINI index (a measure of income inequality in which 0.0 = perfect equality): 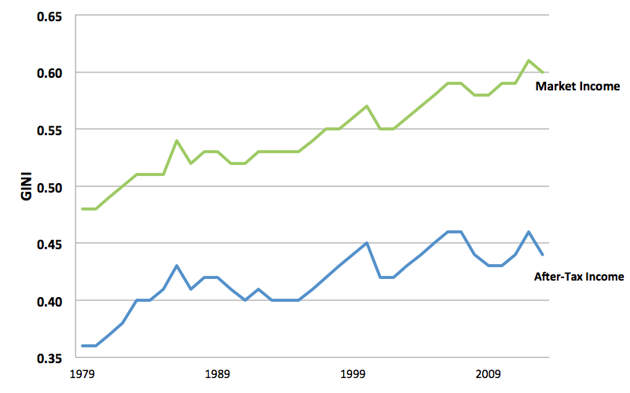 What we see is the beginning of a de-couping of market income inequality from after-tax income inequality. This is a perfect example of what the President was talking about in the interview with Marc Maron when he described how government in a large democracy works.

It’s like steering an ocean liner and making a 2 degree turn so that 10 years from now we’re suddenly in a very different place. You can’t turn 50 degrees all at once because that’s not how societies – especially democracies – work. As long as we’re turning in the right direction and we’re making progress, government is working like its supposed to.

There are certainly those on the left who would like to see something more like that 50 degree turn when it comes to income inequality. President Obama’s point is that’s now how democracies work. But if, at the root of this question is the economic insecurity many Americans are feeling these days, the other argument is that attempting to turn the ocean liner too hard, too fast could risk a disaster and actually increase insecurity.

This is also how President Obama’s efforts to reduce income inequality are similar to the systemic approach he’s taken to combating climate change. It recognizes that economic systems contain the same kind of interconnectivity and tendency towards homeostasis that define all systems and injects incentives that create feedback loops for positive change. That is what happens when low income people are freed from health care debt and find that their health insurance can be portable. On the other end of the spectrum, it happens when financial institutions are incentivized to downsize rather than face increasingly large capitalization requirements. Or when the entire financial industry shrinks because many of its more nefarious ways of making money are eliminated.

In our bumper-sticker culture, these kinds of efforts to slowly turn the ocean liner 2 degrees don’t tend to grab headlines. But with the CBO’s latest report, we can begin to see the new trajectory we’re on when it comes to income inequality.