The people of Britain who voted for Brexit out of economic anxiety are getting a rude wake-up call about the globalization of the economy. The value of the pound is dropping like a rock – as are their stock markets. Regardless of where they stand in terms of income, that is going to hurt everyone.

But as Zach Beauchamp explains, there are other issues to be concerned about as well.

Britain’s decision to leave the European Union is one of those rare events that should chill you to your core, as it has already chilled me to mine.

Why? Because it calls into question the best thing humanity has created in its political history: the post–World War II global order…

This global order depends crucially on a set of supranational institutions, like the EU. These institutions can only function if member states can keep nationalism in check and submit to a shared framework for governing the world. The global order has served us astonishingly well, making the post–Cold War era the richest and least violent time in human history.

But that optimism is now threatened. British voters, motivated largely by xenophobic nationalism, have opted out of one of the pillars of the postwar order, the European Union. For the first time since World War II, Western nationalism has beaten globalism in a major way.

Beauchamp goes on to provide this chart, which demonstrates how the post-war global order has affected the number of people who have died as a result of war. 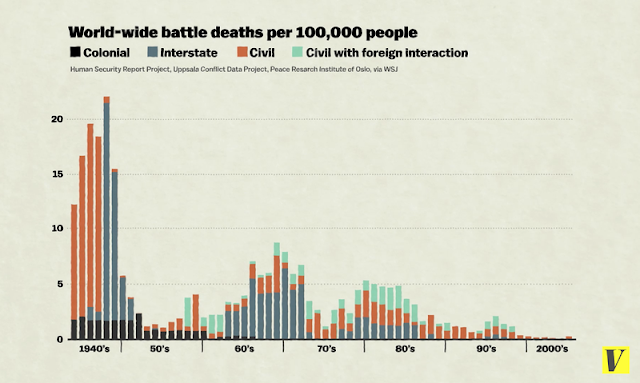 In addition, that global order has resulted in a huge decline in the number of people living in extreme poverty.

As we’ve seen here in this country, the same changes that led to these outcomes have ignited a backlash of fear and nativism. Donald Trump dismisses the importance of NATO and, in the small minds of people like Sarah Palin, this global order that has saved millions of lives is a threat.

Congratulations, smart Brits. Good on you for ignoring all the fear mongering from special interest globalists who tend to aim for that apocalyptic One World Government that dissolves a nation’s self-determination and sovereignty… the EU being a One World Government mini-me.

America can learn an encouraging lesson from this.

It is time to dissolve political bands that connect us to agendas not in our best interest. May UN shackles be next on the chopping block.

To the extent that liberals care about peace and economic security – not just for the people of this country, but around the world – this global order presents both a huge success and some new challenges. Too often we see a similar kind of nativism on the left. So there are struggles to be engaged about everything from income inequality to trade agreements. But that must happen alongside defending the gains that have been made.

One of the marks of a truly great leader is the ability to see the big picture and the unique challenges that lay ahead of us. That’s why, in the midst of all this, I thought about two of the first major speeches President Obama gave in 2009. One was in Cairo, Egypt and the other was his acceptance speech upon receiving the Nobel Peace Prize. In both of them, he articulated the importance of this global order. Here is what he said in Cairo:

For we have learned from recent experience that when a financial system weakens in one country, prosperity is hurt everywhere. When a new flu infects one human being, all are at risk. When one nation pursues a nuclear weapon, the risk of nuclear attack rises for all nations. When violent extremists operate in one stretch of mountains, people are endangered across an ocean. When innocents in Bosnia and Darfur are slaughtered, that is a stain on our collective conscience. That is what it means to share this world in the 21st century. That is the responsibility we have to one another as human beings.

And this is a difficult responsibility to embrace. For human history has often been a record of nations and tribes — and, yes, religions — subjugating one another in pursuit of their own interests. Yet in this new age, such attitudes are self-defeating. Given our interdependence, any world order that elevates one nation or group of people over another will inevitably fail. So whatever we think of the past, we must not be prisoners to it. Our problems must be dealt with through partnership; our progress must be shared.

During his Nobel acceptance speech, President Obama referred to this quote from John F. Kennedy: “Let us focus on a more practical, more attainable peace, based not on a sudden revolution in human nature but on a gradual evolution in human institutions.” Obama went on to describe the human institutions (i.e., global order) that are necessary to promote peace. But then he spoke directly to the challenge we are currently witnessing.

Agreements among nations. Strong institutions. Support for human rights. Investments in development. All these are vital ingredients in bringing about the evolution that President Kennedy spoke about. And yet, I do not believe that we will have the will, the determination, the staying power, to complete this work without something more — and that’s the continued expansion of our moral imagination; an insistence that there’s something irreducible that we all share.

As the world grows smaller, you might think it would be easier for human beings to recognize how similar we are; to understand that we’re all basically seeking the same things; that we all hope for the chance to live out our lives with some measure of happiness and fulfillment for ourselves and our families.

And yet somehow, given the dizzying pace of globalization, the cultural leveling of modernity, it perhaps comes as no surprise that people fear the loss of what they cherish in their particular identities — their race, their tribe, and perhaps most powerfully their religion. In some places, this fear has led to conflict. At times, it even feels like we’re moving backwards…

Adhering to this law of love has always been the core struggle of human nature. For we are fallible. We make mistakes, and fall victim to the temptations of pride, and power, and sometimes evil. Even those of us with the best of intentions will at times fail to right the wrongs before us.

But we do not have to think that human nature is perfect for us to still believe that the human condition can be perfected. We do not have to live in an idealized world to still reach for those ideals that will make it a better place…For if we lose that faith — if we dismiss it as silly or naïve; if we divorce it from the decisions that we make on issues of war and peace — then we lose what’s best about humanity. We lose our sense of possibility. We lose our moral compass.

That, my friends, is the articulation of a liberal response to the kind of nativism we are seeing emerge – both in Europe and right here at home.