I am growing less worried that the American people will actually elect Donald Trump to be our next president (caveat: I know, complacency is not allowed – that’s why I just wrote, “Don’t Boo…Vote!”) What I’m growing more concerned about lately is the prospect of what happens when he loses. That is precisely what is so troubling about his 2nd Amendment remedy remarks this week.

No matter how much he and his campaign try to spin what he said, Trump has a long history of making incendiary remarks himself and looking the other way when his supporters do so. That is exactly what Michael Crowley documented yesterday. I remember when it donned on me just how dangerous Trump is. It happened when he made these remarks about people who were protesting at his rallies.

“Part of the problem and part of the reason it takes so long [to kick them out] is nobody wants to hurt each other anymore,” Trump said during a speech at the Peabody Opera House — around 12 miles from Ferguson, Mo., the site of racially charged mass protests in 2014.

“There used to be consequences. There are none anymore,” Trump said.

As I wrote at the time, there are many of us who remember the days when the response was to “hurt” protesters. 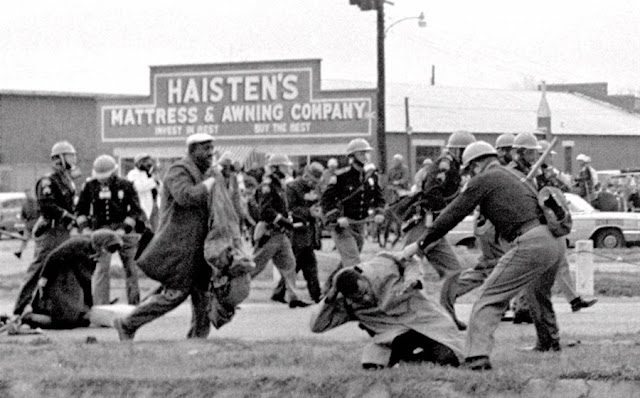 We have no desire to go back to those times.

The reason it is dangerous for a presidential candidate to say these kinds of things is that there has been a growing threat of a new confederate insurgency that has been primed by conservatives over the last eight years. That was the subject of my very first post here at the Washington Monthly almost two years ago. In it, I quoted an important piece by Doug Muder titled, “Not a Tea Party, a Confederate Party.” Here is how he described the mindset that connects the two:

The essence of the Confederate worldview is that the democratic process cannot legitimately change the established social order, and so all forms of legal and illegal resistance are justified when it tries…

The Confederate sees a divinely ordained way things are supposed to be, and defends it at all costs. No process, no matter how orderly or democratic, can justify fundamental change.

When Donald Trump forecasts a rigged election, talks about 2nd Amendment remedies, and (as he did last night) suggests that President Obama and Hillary Clinton are the founders of ISIS, he is undermining the legitimacy of our democratic process in the minds of those who hold this Confederate worldview and fueling their fantasies about an insurgency.

It is important that we recognize what is going on here. But I refuse to let them make me afraid. This country has faced down much bigger threats that the one posed by a raving Donald Trump. We’ll do so again. It’s simply important to know the stakes and make an informed choice about our response.