Harry Enten points out that, while Trump is leading in the polls with men by about 7 points, Clinton is leading with women by about 20. In other words, the gender gap in this election is going to be yuuuuuge. He provides this graph for historical comparison. 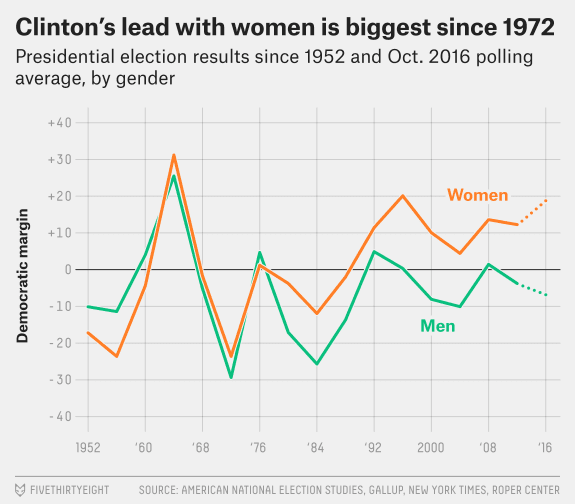 But there is something he fails to mention. His headline left out one word. It should have read: “Men Are Treating 2016 As A ‘Normal’ Election; [White] Women Aren’t.” The growth in the gender gap is mostly related to the fact that more white women are supporting Clinton. That point was made over the weekend by my friend Denise Oliver Velez in an article titled, “The black and brown firewall against Trump is being joined by more white women.”

As a result of the broadcast of the Trump tapes and women stepping forward to discuss Trump’s predatory treatment of them, we now see headlines and polling data showing that women are rejecting Trump and many will now be voting for Hillary. That’s great news!

But there’s room for the headlines to be more accurate, since the “women” now abandoning a vote for Trump are mainly white women who were either Republicans or Independents. A majority of women of color didn’t need to hear Trump spew on tape to recognize his racism, xenophobia, and misogyny. Nor did we need a prod to jump ship to become Democrats. We’ve been here all the while, along with white female Democrats who support our party.

At the end of his piece, Enten considers a question.

We also don’t know whether or not Clinton’s large lead among women is more a pro-Clinton or an anti-Trump vote.

As he goes on to say, it’s probably a bit of both. We’ve heard a lot of analysis about why white women would be motivated to vote against Trump. On the pro-Clinton side, Michael Cohen wrote something recently that hasn’t been covered much in the media but that I’m hearing from female friends/family.

This take is five days late, but after watching Hillary Clinton at the second presidential debate last Sunday — I am in awe of her.

It’s not necessarily because of the answers she gave or the positions she stated, but rather the self-discipline she showed that allowed her to stand on stage with Donald Trump and not completely lose her mind.

Think about what happened on Sunday. Trump called Clinton a liar. He said she had hate in her heart. He told her that if he were president he’d throw her in jail. He talked about the philandering of her husband Bill Clinton and even brought to the debate hall women who’ve accused him of sexual assault. He lied incessantly, about both his own plans and those of Clinton. He sought to intimidate her by looming over her and standing directly behind her as she answered questions…

And yet, somehow, Hillary Clinton maintained her composure. She didn’t get angry; she didn’t get petulant; she didn’t give Trump a richly deserved slap in the face. Amazingly, she answered all the questions posed to her with a combination of wonkiness, empathy, and grace. She largely ignored Trump’s constant lies and somehow stuck to her game plan of not engaging with his bullying. Lost in the coverage of Trump’s crudeness, ignorance, and classless behavior, was Clinton’s debate performance — one of the most extraordinary in modern political history.

Women (and obviously some men) have been noticing that in these debates Clinton has faced down this narcissistic bully and has done so while maintaining her dignity and composure. Since we’ve never seen a candidate go off the rails the way Trump has, we’ve also never witnessed an opponent have to stand their ground while not sinking into the gutter. It just so happens that the first presidential candidate of the television era to face such a challenge is a woman – who has done an extraordinary job. While many (mostly male) pundits missed that part of the equation – an awful lot of women noticed.

The final item I’ll point to is a bit amusing and suggests that the gender gap is actually bigger than a lot of people think.

Either married couples aren’t talking politics this election season — or they’re in total disbelief their spouse could possibly be voting for that candidate. A YouGov/Economist poll out Monday revealed a considerable discrepancy between whom married registered voters think their spouse is voting for, and whom those married men and women are actually voting for.

Will Jordan provides the data on that.

Married WOMEN who say they are voting for Hillary Clinton: 45%.

Married MEN who think their SPOUSE is voting for Hillary Clinton: 33% pic.twitter.com/8mSotUSnWl

We’re used to hearing about the Bradley effect. This one might be the “save my marriage effect.”