This morning I’m thinking about what a lot of smart people said before we knew who the two presidential candidates in this election would be.

We heard political scientists talk about the rarity of a party that currently occupied the White House winning a presidential election – especially when so many people felt that the economy was still dragging. With his approval numbers lagging, there were doubts that an embrace of Obama’s presidency would be beneficial for the Democratic candidate in an election fueled by angry voters who were looking for change.

The Democratic nominee rejected that thinking.

Of course, since those concerns were raised, President Obama’s approval numbers have soared. Juliet Eilperin and Greg Jaffe note that it now stands at 56 in Gallup’s tracking poll.

For the first time in decades — dating back to Ronald Reagan — a lame-duck incumbent is in high demand on the campaign trail.

The good feelings, meanwhile, extend beyond the president himself. First lady Michelle Obama has been perhaps Clinton’s most effective surrogate, campaigning alongside her in North Carolina last month. In crucial swing states such as Florida and Pennsylvania, Vice President Biden’s popularity surpasses even that of the president at his eight-year peak. Nearly two-thirds of voters in Pennsylvania, for example, have a favorable view of the vice president and the first lady, according to a recent Bloomberg Politics poll.

Later tonight we’ll learn whether or not Clinton made the right call. But we got a sneak preview last night in Philadelphia when a former president, a current president and the most eloquent First Lady in memory came together for one last campaign event. 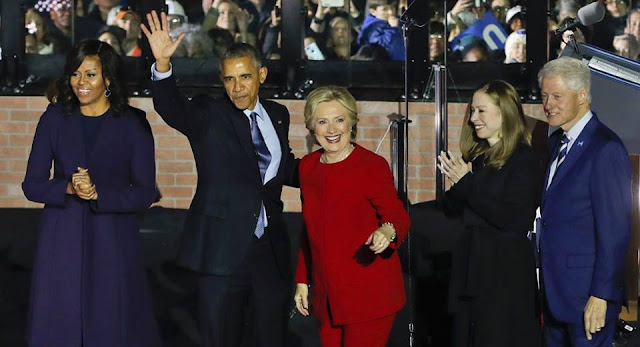 The Founding Fathers likely could not have imagined the scene Monday night outside Independence Hall, the building where they signed the Declaration of Independence and debated the Constitution more than two centuries ago.

A black man, standing behind the seal of the President of the United States, passed the torch of the world’s longest lasting democracy to a woman on the eve of an election that polls say she is favored to win.

With Jersey rock heroes Bruce Springsteen and Jon Bon Jovi as warm-up acts, and former President Bill Clinton and first lady Michelle Obama looking on, Hillary Clinton and Barack Obama rallied the largest crowd of her campaign — 33,000 strong — to mark the end of one presidency and the beginning, they hope, of another.

Watching this event last night I was left pretty speechless at the history that is being made right in front of our eyes by a rejection of conventional wisdom that has too often reinforced the status quo.