Earlier I outlined the parts of President Obama’s legacy that Republicans won’t be able to touch. But even in doing so, I acknowledged that they will work to roll back many of the gains that this administration has made. In order to do so, they have to shift from their post-policy position of the last eight years to actually govern.

As we’ve seen over the last few days, that is posing a problem for the new administration on both their transition plans and agenda. It is worth keeping an eye on the former because that will tell us a lot about whether, when it comes to the latter, this administration and Congress will take a “burn it all down” approach or be constrained in any way by actual results. In the meantime, let’s take a look at some of the problems Republicans will face as they try to fulfill the promises they made during this campaign. Here are a few examples:

Republicans are signaling that this will be the first thing up. Kellyanne Conway even went so far as to suggest that Trump would call a special session of Congress on inauguration day to repeal Obamacare. But we’ve already seen that the president elect says he’s now willing to keep parts of the law – like the prohibition against refusal of coverage for pre-existing conditions and the provision allowing young people to stay on their parent’s plans until they are 26. That provides an excellent opportunity for someone like Sen. Ted Cruz to gum up the works and demand a total repeal.

Beyond the politics, a lot of people have made good arguments about why a “reform” of Obamacare will be difficult for Republicans to pull off. Charles Gaba provides a nice illustration by suggesting that the entire ACA package is like a 3-legged stool. 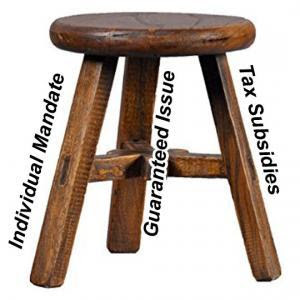 By removing the individual mandate and tax subsidies, the “guaranteed issue” (i.e., prohibition of exclusion for pre-existing conditions) cannot hold up on its own. You can read more from Gaba to understand why that is the case. But the end result is that it would either drive insurance companies out of business or send insurance premiums skyrocketing.

Republicans will also have to face the fact that they will either have to pass a repeal via something called “budget reconciliation” (which only requires a simple majority, but can only be used for fiscal matters) or they’ll have to end the use of the filibuster. None of that even tackles the fact that they have no agreement on a plan to replace Obamacare.

This is a promise that Trump made over and over again on the campaign trail and would seem to have a lot of support from Congressional Republicans, since some of them went so far as to write a letter to the leaders of Iran in an attempt to undermine negotiations.

But what Trump never mentioned when he talked about the agreement is that ending it is not simply up to the United States. As David Herszenhorn reports, members of the EU countries are already speaking up to remind Trump that they’re not pulling out of the deal. Other countries involved in the pact include both China and Russia.  Herszenhorn goes on to explain what will happen if the U.S. is the only country to pull out and tries to reimpose sanctions unilaterally.

If the Trump administration tries to back out of it, the other parties will move ahead and ease sanctions provided Iran meets its commitments. That could lead to U.S. companies losing out on potential business deals as Iran is welcomed back into global markets and makes major purchases such as a new fleet of civilian airliners.

Pull Out of the Paris Climate Accord

Of all the things Trump has said throughout his campaign, his suggestion that climate change is a hoax is perhaps the one that will have the most long-term impact (right up there with Supreme Court appointments). The one thing to keep in mind about the choices Trump makes on this issue is that dealing with climate change has not only been embraced by Democrats in this country and the other 195 signatories to the Paris Climate Accord. As we saw in the lead-up to that agreement, much of corporate America is on board too. Here’s an announcement from the White House about that:

With this announcement, a total of 154 companies will have signed the American Business Act on Climate Pledge to demonstrate their support for action on climate change and the conclusion of a climate change agreement in Paris that takes a strong step forward toward a low-carbon, sustainable future. These 154 companies have operations in all 50 states, employ nearly 11 million people, represent more than $4.2 trillion in annual revenue, and have a combined market capitalization of over $7 trillion.

The question becomes: how much of the Republican position on climate change was merely a way to oppose President Obama? Since the election concluded, we’ve already seen Senate Majority Leader Mitch McConnell back off of any promises that coal jobs will return.

There are too many items in this category to cover them all. But it’s interesting to imagine someone on Trump’s team going through them feverishly because he has promised to get rid of them all.

The most likely to go is the one that allowed DREAMers to come out of the shadows. Given how Trump campaigned, it is hard to imagine that one surviving. But how will these 750,000 young people react? Take a look at how Tom Hayden described them a couple of years ago:

The Dreamers remind me of the Freedom Riders fifty years ago who, deciding they wouldn’t settle for life under Jim Crow, risked jail and racist violence until the Kennedy administration was won to their side, and a political party realignment began. The Dreamers have petitioned, engaged in civil disobedience, lobbied for legislation at state and federal levels, and refused to accept defeats along the way.

I don’t expect that these strong courageous young people will go quietly into the night when Trump tries to send them back into the shadows.

One other executive action is worth keeping an eye on. In about two weeks (December 1st), President Obama’s new rule on overtime pay goes into effect. Republicans and their corporate partners really hate this new rule. But it will be a boon to about 12.5 million working class people all over the country. What Trump does with that will be fascinating to watch.

None of this is to suggest that Donald Trump and Republicans won’t do severe damage on these issues. It’s simply that promises to make everything “great” won’t be as easy to implement as the president-elect pretended throughout the campaign.