The Bureau of Labor Statistics released the next-to-last jobs report that we’ll see during the Obama administration and the top line numbers looked pretty good. Overall the economy added 178,000 jobs in November and the unemployment rate dropped to 4.6% (the lowest since Aug. 2007). That means that since early 2010, the private sector has added 15.6 million jobs. Here is how Steve Benen charts that course: 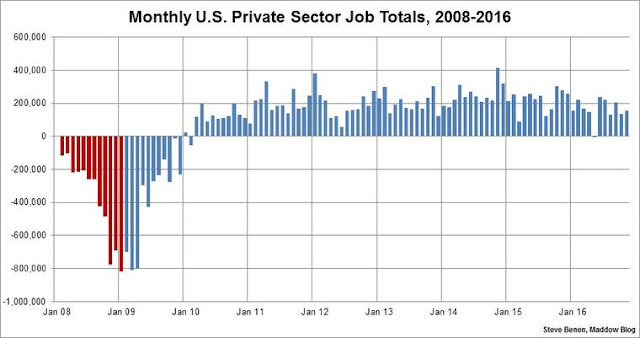 One of the caveats to all of this good news is that the labor force participation rate (LFPR) dropped slightly to 62.7% and remains historically low. It is generally assumed that this indicates that there is “slack” in the labor force, which doesn’t capture what are often called “discouraged” workers. A further assumption is that more robust job creation would entice those workers back into the labor force.

But before we jump to those conclusions, it is helpful to spend a little time examining why the labor force participation rate has declined. Most economists categorize the reasons into two groups: (1) cyclical and (2) structural. In the aftermath of the Great Recession, the high unemployment rate contributed to cyclical explanations. People dropped out of the labor force because jobs were difficult to find and wages – at best – were stagnant.

When it comes to the structural nature of this issue, I found the explanation by Elisabeth Jacobs to be significant. For example, here is a chart that explains what has happened to the LFPR since the BLS started tracking it back in 1948. 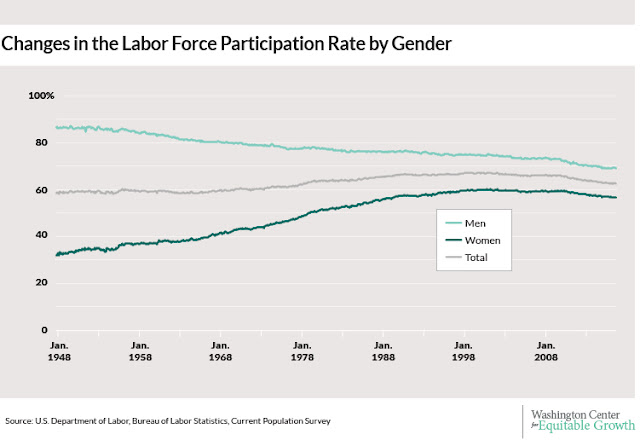 As Jacobs says, the labor force participation rate for men has been declining for 60 years. That was masked by a fairly steep increase in the number of women joining the labor force that seemed to peak in the late 90’s and has started to decline as well. The entry of women into the work force has been widely documented. But the structural forces that have been affecting men for all these years, and women more recently, are at least partly related to two things:

Those changes don’t indicate a “slack” in the labor market. They are simply people who are choosing not to work.

But Jacobs goes on to point to areas where government policies could help raise the LFPR. For those who remain “discouraged” about wages and the availability of jobs, an investment in infrastructure and raising the federal minimum wage are key policy initiatives that should be considered. She goes on to suggest that there is an additional reason why women (and some men) might be dropping out of the labor force.

Understanding why women’s labor force participation has stalled is key to reversing the downward trends in the national rate. In 1990, the United States had the sixth-highest female labor force participation rate amongst 22 high-income OECD countries. By 2010, its rank had fallen to 17th. Why have other high-income countries continued their climb while the United States has stalled? Research by economists Francine Blau and Lawrence Kahn suggests that the absence of family-friendly policies such as paid parental leave in the United States is responsible for nearly a third of the U.S. decline relative to other OECD economies. As other developed countries have enacted and expanded family-friendly policies, the United States remains the lone developed nation with no paid parental leave.

Jacobs also highlights a policy solution that I have written about in the past on a couple of occasions.

A second proactive policy option to improve labor force participation is a criminal justice reform agenda that includes a reduction in the incarceration rate and policies to reduce discriminatory employment practices against those with criminal records…Coupled with the rise in incarceration, nearly one in three adults in 2010 had a serious misdemeanor or felony arrest that can show up on a routine background check for employment, and a substantial share of discouraged workers report a felony conviction. Nine in ten large corporations report that they conduct criminal background checks, and a wide range of research suggests that a criminal record (both felony and misdemeanor charges, regardless of age) plays a significant negative role in an individual’s employment prospects.

What is interesting to note is that when the topic of low LFPR is addressed, the policy solutions of infrastructure spending and minimum wage are the ones that are often articulated. But because family-friendly policies and criminal justice reform disproportionately affect women and people of color, they are too often neglected. Perhaps that is where “identity politics” comes in to play.