After President Donald Trump’s rocky first month in office, there’s been growing speculation — or wishful thinking — about whether Trump’s hold on the presidency will last. “I still have trouble seeing how the Trump administration survives a full term,” New York Times columnist David Brooks recently wrote.

But so long as a Republican-controlled Congress still thinks it can work with Trump on its pet priorities, such as tax reform, Obamacare repeal and judicial appointments, impeachment is likely remote. And the 25th Amendment, on which some have pinned their hopes as an alternative route to Trump’s removal, would require the Vice President and a majority of the Cabinet to invoke – another improbable development.

But even if Trump’s presidency implodes in less than its allotted four years, the end of Trump won’t necessarily mean the end of Trumpism — i.e., the forces that led to his election in the first place. Under the constant distraction of the daily outrages perpetrated by this Administration, it’s easy to lose sight of the larger problem: the widespread economic dissatisfaction that fueled the resentment-driven politics of 2016. Without a solution to this underlying dysfunction, Trump’s successors – while perhaps less destructive – may be no less Trumpian in their outlook on the world and America’s place in it. It’s not enough to rid the nation of Trump if Trumpism endures.

Even before Trump’s ascendance, there were signs that America was becoming a meaner, less generous place. Small-dollar and mid-range donations to charities have dropped by greater than 25 percent over the last decade, according to the Institute for Policy Studies. Volunteerism has been declining too. In 2015, says the Bureau of Labor Statistics, 24.9% of Americans reported volunteering, down from 27.6% in 2002 (the earliest year for which data are available) and a peak of 28.8% in 2003-2005. Meanwhile, hate groups have re-emerged from the shadows, with the number of active groups — including black separatist groups — roughly doubling since 1999.

What could cure Trumpism, says Harvard University economist Benjamin Friedman, is to break the economic stagnation that’s gripped the middle class for decades. Except for a brief burst in the 1990s, during the tenure of President Bill Clinton, the economic lot of the American middle class has been flat for 40 years. From 1973 to 1993, according to the Census Bureau, real median incomes rose a mere $337, from $50,141 to $50,478. In 2015, real median income was only $6 higher than it was in 1998.

Moreover, median incomes have stayed stagnant in the face of overall economic growth, the spoils of which have accrued to an increasingly wealthy elite. As labor economist Stephen Rose has documented, the so-called “upper middle class” — educated professionals but not the Trump-like super-rich — grew from 12.9% of the population in 1979 to 29.4% in 2014 and, together with the rich, controlled 63% of the nation’s total income.

In The Moral Consequences of Economic Growth, a volume published a full decade before last year’s election but is a must-read for anyone who wants to understand the current moment, Friedman argues that the impulses we’ve come to associate with Trumpism – xenophobia, racism and nationalism – tend to reach their zenith when the broad middle class is failing to see economic progress.  At least in post-Civil War America, says Friedman, social progress, or lack thereof, has been largely lockstep with the financial state of the middle class.

“[T]he attitude of people toward themselves, toward their fellow citizens and toward their society as a whole is different when their living standard is rising than when it is stagnant or falling,” Friedman writes. “It is likewise different when they view their prospects and their children’s with confidence as opposed to looking ahead with anxiety or even fear.” 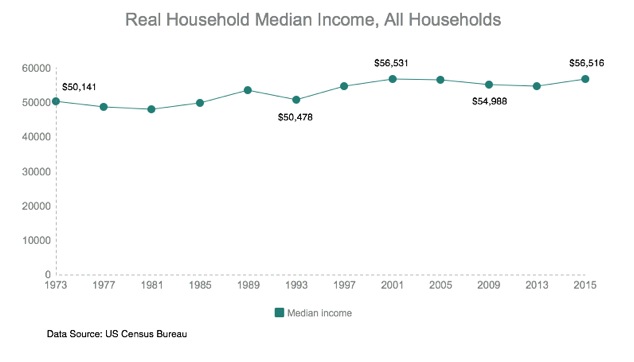 Using a wealth of historical precedent both here in the United States and in western Europe, Friedman argues that times of stagnation for the broad middle class, especially if coupled with rising inequality, have tended to coincide with social regression. The reason, Friedman argues, is that only when people are feeling secure in their own circumstances do they feel they can “afford” to be generous to others. In fact, writes Friedman, “in a stagnant economy, where one person’s gain is necessarily someone else’s loss, people who get ahead are perceived not only as doing so at other people’s expense but as directly disadvantaging others.”

The populist era of the 1890s, for example, was strongly anti-immigrant, anti-Semitic and anti-Catholic, and it was precipitated by years of economic turmoil following the collapse of farm prices, bankruptcies and an 18 percent unemployment rate. “[T]he populists represented a turning backward,” writes Friedman in a passage that could just as easily describe today, “a closing of American society, a defensive rigidification, and in many ways a retreat from tolerance, in the face of continual economic disappointment.”

Broadly shared economic expansion, on the other hand, puts more Americans in a generous mood, and in fact, many of America’s greatest social advances have come during times of middle-class prosperity. The 1964 Civil Rights Act and the War on Poverty, for example, coincided with the height of post-war growth for the middle class. Likewise, the first Progressive Era, that of Presidents Teddy Roosevelt and Woodrow Wilson, was also one of widely shared growth.

“It is not hard to see that a strong economy, where opportunities are plentiful and jobs go begging, helps break down social barriers,” writes Friedman. “Bigoted employers may still dislike hiring members of one group or another, but when nobody else is available, discrimination most often gives way to the sheer need to get the work done. … In the American construction boom of the late 1990s, for example, even the carpenters’ union – long known as a ‘traditional bastion of white men, a world where a coveted union card was handed down from father to son’ – began openly recruiting women, black and Hispanics for its apprenticeship program.” Middle-class growth, in other words, keeps nascent racism at bay.

But if the ideal environment for social progress is a thriving middle class, virtually none of Trump’s policies are going to have that effect.

Friedman’s thesis offers a possible solution to one of the enduring mysteries of the 2016 election: how so many seemingly rational (and even well-to-do) white middle-class Americans could have fallen into the trap of Trumpism.

Exit polls show that the median income of the typical Trump voter was higher than the median income of someone who voted for Hillary Clinton. Nevertheless, these Americans don’t feel as if they’re moving ahead themselves or that their children will succeed. Thus they have less incentive to secure the success of others and instead adopt a zero-sum view of the world: your loss is my gain. Under this “politics of scarcity,” it’s easy to see where this line of thinking leads: Why subsidize someone else’s health insurance when my own premiums are going through the roof? Why let more people into the country when there aren’t enough jobs to go around? Why provide “handouts” to the “undeserving”?

But if the ideal environment for social progress is a thriving middle class, virtually none of Trump’s policies are going to have that effect. His tax cut proposals will enrich the wealthy at the expense of the middle class; his proposed tariffs could spark a trade war that raises the costs for consumers on everything from shoes to cars; the repeal of the Affordable Care Act will force 20 million Americans to lose their health insurance; and so on.

Nineteenth-century populism met its end almost by serendipity when prospectors struck gold in Alaska in 1898 and a Scottish chemist named John Stewart MacArthur invented a process that dramatically raised the productivity of gold mines in South Africa. Because the whole world was on the gold standard at the time, the sudden expansion of the gold supply meant freer money and credit. The American economy was soon booming, and the populists vanished with little fanfare.

It’s possible that a similar sort of breakthrough could rescue us from the current era of stagnation. But the surer bet is to begin developing the ideas and strategies that could renew broad-based middle-class prosperity.

Yes, by all means, let’s get rid of Trump. But stagnation is the true enemy.

Anne Kim is Washington Monthly contributing editor and the author of Abandoned: America’s Lost Youth and the Crisis of Disconnection.