* The Congressional Budget Office (CBO) has released their scoring of the Republican AHCA (their Obamacare repeal/replace bill). All of the headlines focus on the big number: 24 million people will lose their health insurance by 2026 as a result of this bill. It would take the total number of non-elderly uninsured back up to 52 million – pretty much where we were prior to Obamacare.

* Speaker Paul Ryan issued a statement about the CBO report that tells us a lot about his priorities.

This report confirms that the American Health Care Act will lower premiums and improve access to quality, affordable care. CBO also finds that this legislation will provide massive tax relief, dramatically reduce the deficit, and make the most fundamental entitlement reform in more than a generation.

* It’s true that AHCA would lower premiums. CBO forecasts that they will go up slightly at first – but then:

By 2026, average premiums for single policyholders in the nongroup market under the legislation would be roughly 10 percent lower than under current law, CBO and JCT estimate.

Although average premiums would increase prior to 2020 and decrease starting in 2020, CBO and JCT estimate that changes in premiums relative to those under current law would differ significantly for people of different ages because of a change in age-rating rules. Under the legislation, insurers would be allowed to generally charge five times more for older enrollees than younger ones rather than three times more as under current law, substantially reducing premiums for young adults and substantially raising premiums for older people.

* In other words, as I wrote earlier today, this plan is great as long as you are young and healthy. For those who are older and/or less healthy, it is a disaster. Here is how CBO illustrated that point: 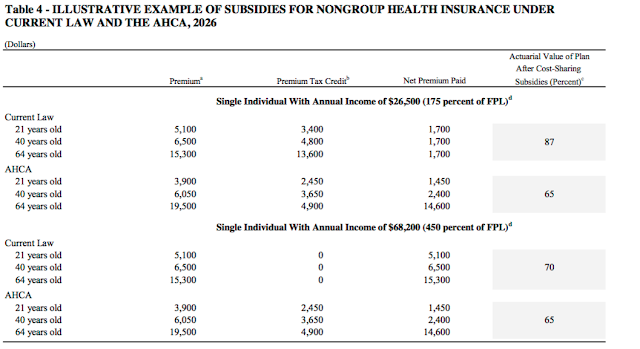 * Here is what CBO said about those deductibles Republicans have been complaining about under Obamacare:

Because of plans’ lower average actuarial values [AHCA eliminates Gold, Silver and Bronze Plan distinctions], CBO and JCT expect that individuals’ cost-sharing payments, including deductibles, in the nongroup market would tend to be higher than those anticipated under current law. In addition, cost-sharing subsidies would be repealed in 2020, significantly increasing out-of-pocket costs for nongroup insurance for many lower-income enrollees.

* Here is one thing that is important to keep in mind about the CBO report:

Because of the magnitude of its budgetary effects, this legislation is “major legislation,” as defined in the rules of the House of Representatives. Hence,it triggers the requirement that the cost estimate, to the greatest extent practicable, include the budgetary impact of its macroeconomic effects. However, because of the very short time available to prepare this cost estimate, quantifying and incorporating those macroeconomic effects have not been practicable.

In other words, because of the rush to release this report, CBO did not examine the bills effects on other parts of the economy (i.e., jobs).

* It is now time to compare what Trump said about his “great” health care plan to what he and Republicans have actually proposed. Here’s a pretty good summary of the former from the folks at TPM. 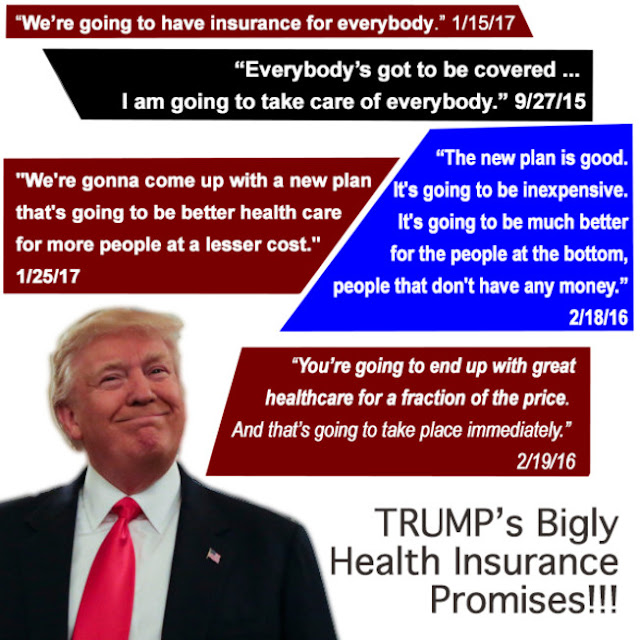