* The folks at NBC’s First Read started off this morning by suggesting that this would be a consequential week for Trump. Here is what they previewed:

1. Does FBI Director Comey publicly repudiate Trump’s wiretapping charge?
2. How far does Comey go on Russia?
3. Does the health-care effort survive — or die?
4. Is Gorsuch’s confirmation still on track?

Based on what happened today, the only one that isn’t a disaster for the Trump administration right now is #4.

* When it comes to the House Select Committee on Intelligence hearing today, this is a pretty good summary:

The house is on fire, Trump is running around with a box of matches, and the GOP demands to know who called the fire department.

Asked at Monday’s press briefing if President Donald Trump stands by his earlier comments that he is not aware of any contacts between his campaign associates and Russia, Spicer acknowledged former national security adviser Michael Flynn’s previous relationship with the country, but described him as a “volunteer of the campaign.”

And then, understating the role of Trump’s former campaign chairman, Spicer added: “There has been discussion of Paul Manafort, who played a very limited role for a very limited amount of time.”

* There was also this from Spicer today – which seems right out of a definition for “newspeak” in Orwell’s 1984.

* Apparently the Gorsuch hearing today wasn’t a complete disaster for the administration. But then we learned this:

Now some of [Gorsuch’s] former students have raised concerns about Gorsuch’s views on discrimination against female workers. Jennifer Sisk, who graduated from the University of Colorado Law School last year, says that during a Legal Ethics and Professionalism class last spring, Gorsuch told his students that companies should ask women about their pregnancy plans during job interviews, and claimed that many women plan to manipulate their employers by taking maternity leave, then quitting to stay home with their children.

I’m not a lawyer. But even I know that it’s illegal to ask women about their “pregnancy plans” during a job interview. 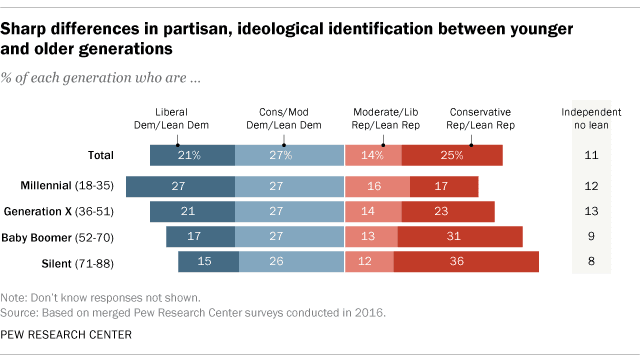 In case you are tempted to be dismissive and suggest that people get more conservative as they get older, Pew debunked that myth a while ago.