There are justifiable critiques to be made against Trump’s decision to bomb an airfield in Syria. The most defensible are those that point out that it was ineffective and should have been coordinated with our global partners. But I have also seen critics suggest that the so-called “red line” against the use of chemical weapons is arbitrary — a critique not based on facts, which also led many journalists to misunderstand Obama’s response.

It is true that since 2011 Bashar al Assad has been engaged in a bloody civil war with his own people. Hundreds of thousands of people have been killed and it has resulted in a refugee crisis that has impacted the politics of both Europe and the United States.

While many of Assad’s actions during this civil war may one day be defined as war crimes, the use of chemical weapons is a prima facie case. That is because they are the only weapons that have garnered specific condemnation from the international community. The Protocol for the Prohibition of the Use in War of Asphyxiating, Poisonous or other Gases, and of Bacteriological Methods of Warfare is usually referred to as the “Geneva Protocol” and was instituted following the use of chemical agents during World War I.

The whole concept of war crimes began to emerge at the turn of the last century and gained momentum following World War II. The fact is that human beings have been killing each other as a way to settle disputes for centuries. Attempting to establish international norms for the process of doing so has always been both a noble undertaking and a recipe for absurdity. For example, the Geneva Conventions began as a way to improve the treatment of wounded soldiers. So while it is assumed that the goal of war is to kill your opponent’s soldiers, there are now rules in place as to how they are to be treated when they are wounded and/or captured. Sane rules of war would stop the practice of killing altogether. But once you take that as a given, you are automatically delving into the absurd.

And yet these rules of war have clearly served a significant purpose, if nothing else than to provide a means to hold leaders and countries accountable when they have been violated. Along with other international norms and alliances coming out of the two World Wars, they have been part of the building blocks that have changed the face of war. Take a look at what has happened to the rate of battle deaths in armed conflict since WWII. 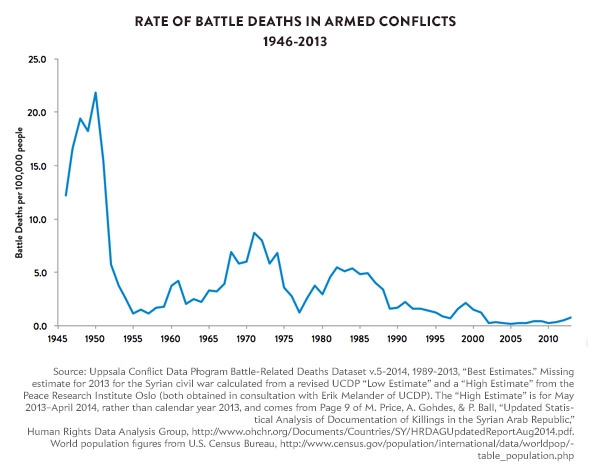 That very slight uptick after 2010 is primarily related to the civil war in Syria. It represents a new challenge to the global order that has developed over the last 60-70 years. Tribalist civil wars fought in the name of religion are replacing conflicts between nations.

As we’ve seen with Assad in Syria, these wars are often fought outside the norms established by the international community. That is precisely why the Obama administration drew a red line over the use of chemical weapons and threatened military strikes until Assad agreed to get rid of them. For the previous administration, the red line was never about getting rid Assad or intervening in the civil war. It was about upholding the Geneva Protocol in order to uphold international law.

In his usual muddled way, Trump alluded to all this during his statement about the missile attack Thursday night by suggesting that it is in our national security interests to prevent the spread and use of chemical weapons while pointing out that Assad had violated the Chemical Weapons Convention.

It might have been the image of suffering babies that elicited an emotional response from Ivanka Trump and the American public, and rightly so. But it has always been Assad’s dismissal of the Geneva Protocol that crossed the red line.